BSA’s No 6 in favourable position to face champion 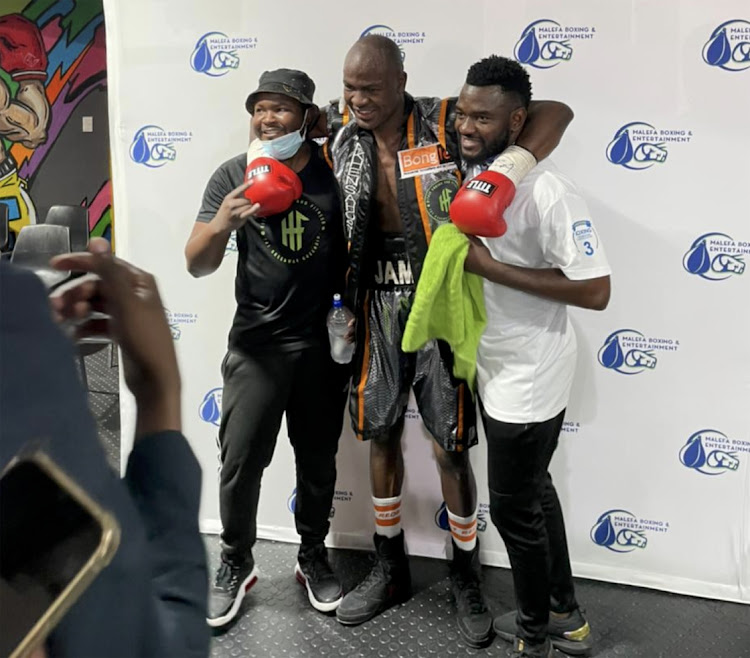 Khensamahosi Makondo is flanked by trainers Nyiko Ndukula, left, and Hloni Maboko after his win against Siphiwe Lusizi on Sunday.
Image: Supplied

Khensamahosi Makondo could have boxed himself into contention for the SA junior middleweight title when the hard-hitter from Malamulele flummoxed Siphiwe Lusizi in just three rounds in front of 150 fans at Booysens Hall on Sunday.

The national title is held by Shervontaigh Koopman who won it with a seventh-round stoppage from defending champion Simon Dladla at Emperors Palace on September 25.

Makondo is rated at No 6 by BSA’s rating committee. Both No 1 and No 2 contenders – Brandon Thysse and Roarke Knapp – will be involved in the WBA Pan African and IBO Youth championship at Emperors Palace on December 4. The Damien Durandt trained Thysse is the champion.

Boyd Allen is the next available contender to challenge Koopman but he has not fought since last year October when he was knocked out in three rounds by Thysse. Linda Ntshingila, who is a spot below Allen, must first redeem himself after being stopped in two rounds by Henrique Lando in 5th Elements tournament in Pretoria on September 18.

This puts 26-year-old Makondo in a favourable position to face Koopman. In fact, it is his stunning win over Lusizi that affords him the opportunity to avenge his third-round defeat by Koopman at the Theatre of Marcellus inside Emperors Palace in March.

Makondo – who was trained by Alan Toweel Junior in Gauteng – made his debut under new trainer and homeboy Hloni Maboko. Interestingly, Maboko is a retired boxer who was also trained by Toweel until he quit in 2018.

Maboko helped Makondo to humble Lusizi from Mdantsane in what was his first loss against five straight wins. Makondo was under pressure going into the fight, coming off two consecutive losses but he calmly handled Lusizi – the former Olympian – who had not fought since 2016. Makondo improved to seven knockouts in seven wins against five losses.

Koopman – who is trained by Vusi Mtolo at RUB Academy in Edenvale – has been matched with Lando from Angola. Their international 10-rounder will form part of Golden Gloves' “No love Lost” box-and-dine tournament that will take place at the Palace of Dreams on December 4.

Award-winning boxing manager Colin “Nomakanjani” Nathan has outdone himself by not only successfully negotiating that Azinga Fuzile fight for the ...
Sport
2 months ago

The WBF Intercontinental title that Thato “Captain Charisma” Bonokoane won last weekend is a marginal title but to the newly crowned champion and his ...
Sport
3 months ago
Next Article