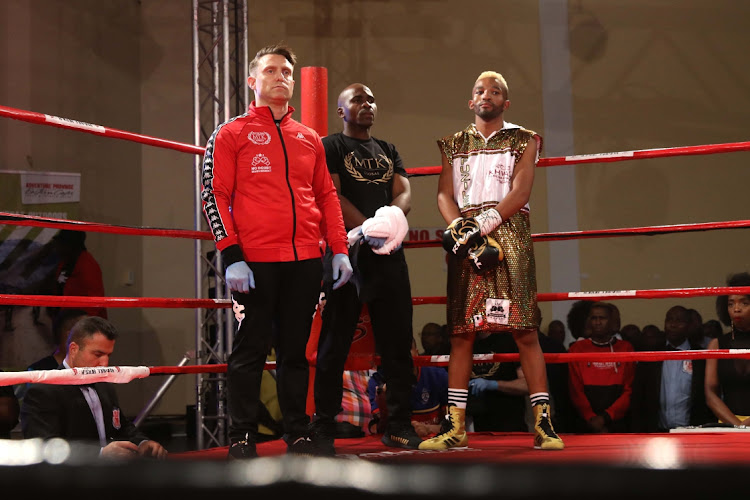 Award-winning boxing manager Colin “Nomakanjani” Nathan has outdone himself by not only successfully negotiating that Azinga Fuzile fight for the vacant IBF junior lightweight belt, but he also got the “Golden Boy” a rare opportunity to fight at the iconic Madison Square Garden which is considered “The World’s Most Famous Arena” in New York, US.

Any fighter who wanted to get noticed fought at the Garden, and for many boxers of yesteryear the moment they knew they made it was when they saw their names in the lights at the historic arena.

That spotlight is now on 25-year-old Fuzlle, the skilfull left-hander, who is trained back home in Duncan Village by Mzamo “Chief” Njekanye. Fuzile will feature there in the main supporting fight for the IBF, WBA Super and WBO lightweight championship between American holder Teofimo Lopez and George Kambosos Jr of Australia on November 27.

This tournament will be staged by Englishman Eddie Hearn of Matchroom Sport. Fuzile will oppose Kenichi Ogawa for the vacant IBF junior lightweight title. Fuzile is rated No. 2, a spot above the 33-year-old Japanese.

Nathan, whose achievements duly won him BSA’s manager of the year award back-to-back in 2017 and 2018, said: “I have said this before and I am saying again now, no one can do what I can in South African boxing.

“I am very excited for SA boxing; this comes at a time when things were down but all of a sudden they are coming together and starting to look bright for our sport. This is a marvellous and massive opportunity for a local fighter to feature not only for a world title but in one of the meccas of boxing.”

Nathan,  whose career as a trainer and manager flourished through the successful relationship he had with respected promoter Rodney Berman before they broke ties a few years ago, paid tribute to Rumble Africa Promotion (RAP) for its continuous support and believing in him as its international advisor. RAP promotes Fuzile.

Every major world title fight contested for by a South African in the last four years has been put together by Nathan’s company. That includes Fuzile’s elimination fight against Englishman Martin Ward in Las Vegas on May 29. Valiant Fuzile won it by a seventh-round technical knockout.

It was that stunning victory that earned him the rights to face the winner between Ogawa and Shavkat Rakhimov. But the Russian pulled out due to an injury. Then last month the IBF championship committee sanctioned Fuzile to face Ogawa, who is unbeaten in the last nine years.

Ogawa briefly held the aforementioned IBF belt from American Tevin Farmer in 2017. But Ogawa tested positive for synthetic testosterone and the Nevada Athletic Commission changed his split points win to a no-contest.

Fuzile has stopped nine of his 15 victims against a loss to Rakhimov, while Ogawa has a single loss against 25 wins with 18 knockouts.

The WBF Intercontinental title that Thato “Captain Charisma” Bonokoane won last weekend is a marginal title but to the newly crowned champion and his ...
Sport
3 months ago

The Gauteng Provincial Boxing Promoters Association will enforce lockdown regulations at Booysens Hall where its member Nomakhosi Maboya will ...
Sport
3 months ago
Next Article