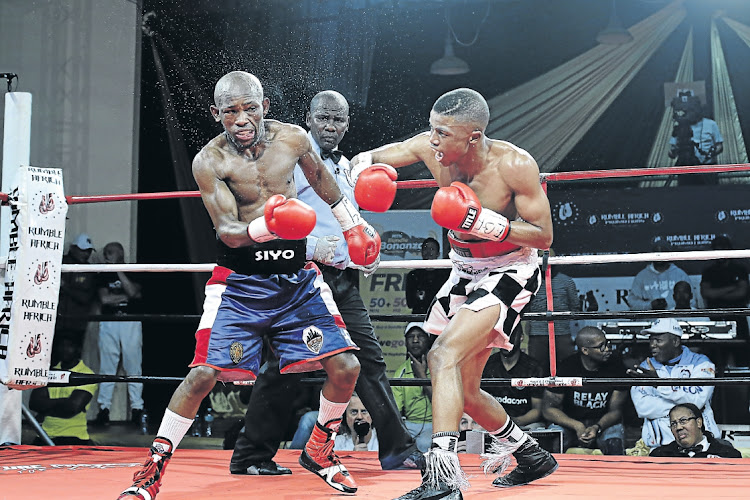 Sivenathi Nontshinga (black and white trunks) connects with a right hook en route to his ninth round TKO of Siyabonga Siyo at Orient Theatre on Sunday.
Image: Nick Lourens

The winner will get the No 1 spot and possibly the right to challenge champion Felix Alvarado, the Nicaraguan who recorded his second defence with a stoppage win over Deejay Kriel on January 2.

In the main supporting bout of RAP's tournament, Sigqibo will put his WBO Intercontinental junior- bantamweight title on the line against Mexican Alejandro Espinoza Tinoco, while Ntwanambi will also put his WBO Africa flyweight belt up for grabs against seasoned SA champion Chauke.

Nomfesane said WBC Silver featherweight holder Dlamini will be involved in an IBF sanctioned fight, with his opponent is yet to be confirmed, while Sonjica will feature in an IBF Africa featherweight championship fight.

She said the organisation of their tournament will cost RAP about R3m.

“We must pay sanctioning fees to both the IBF and WBO, fly in and accommodate officials from abroad,” she said. “Before Covid-19, we would not provide accommodation for local boxers but we are forced nowadays because they must all enter into the bio-bubble, which also costs a lot of money. We will also be required to pay for Covid-19 tests.”

She said Araneta and his team will arrive in Port Elizabeth four days before the fight. “This was part of the negotiations with them,” she explained. “Nontshinga, Sigqibo, Ntwanambi, Ayabonga and Dlamini must also go there seven days prior to the event to acclimatise to the windy weather of PE.”

Battle-marked veteran boxer Koos “The Last Great Warrior” Sibiya says it is not over until it's over.
Sport
3 months ago

Tony Nyangiwe still remains humble despite having been around for more than two decades as a boxing official.
Sport
3 months ago
Next Article