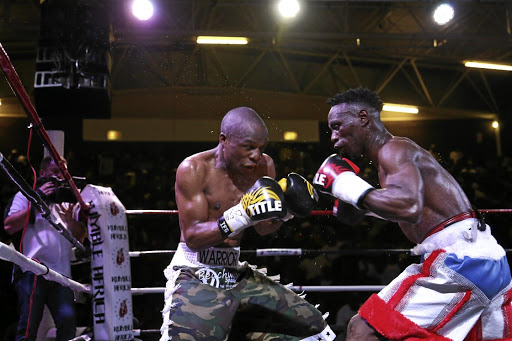 Battle-marked veteran boxer Koos “The Last Great Warrior” Sibiya says it is not over until it's over.

He says his Covid-19-positive test in December brought mixed emotions about him going forward as a fighter.

That was a few days before his fight with Anthony Moloisane, who ended up welcoming Malawian Romeo Makwakwa. Moloisane, under veteran trainer Sechaba Mabuya, stopped his foe within the distance in the Dream Team’s event at the Civic Centre in Kroonstadt.

“Something told me that it was over with me as a boxer,” said the 39-year-old Johannesburg-based former Gauteng, WBF Africa, ABU SADC junior lightweight from Siyabuswa in eMalahleni, Mpumalanga.

“But again, I came back to my senses and said, 'but people who are infected by this disease are recovering, so I must just do what is required of me like self-quarantine and I will be fine'. I did all that, went back for another test and I tested negative. Yes, the cancellation of my fight affected me psychologically."

Sibiya has been given a fight against 10-fight novice Zoravor Petrosian in Russia on March 27. Their eight-rounder will take place at RCC Boxing Academy in Ekaterinburg, where Thabiso Mchunu will oppose that country’s newcomer Evgeny Tishchenko for the rights to challenge WBC cruiserweight champion Ilunga "Junior” Makabu.

“I am excited,” said Sibiya, who will jet out to Russia on March 22 for his fight in Asia. “I still have a dream in boxing. I still feel very fresh and fitness is still there. So, when this opportunity came I did not think twice, I grabbed it and I hope to make the most of it.”

Trainer Bernie Pailman said they have already began preparing, although he will not be accompanying his charge. “My assistant Charity Mukondeleli will go with Koos. I have Mpho Seforo and Sabelo Nkosi preparing for their fights on March 20,” he said.

Tony Nyangiwe still remains humble despite having been around for more than two decades as a boxing official.
Sport
3 months ago

It is unclear which title will be at stake and which rules will be applicable during the SA, IBO All-Africa and WBA Pan African super-middleweight ...
Sport
3 months ago
Next Article