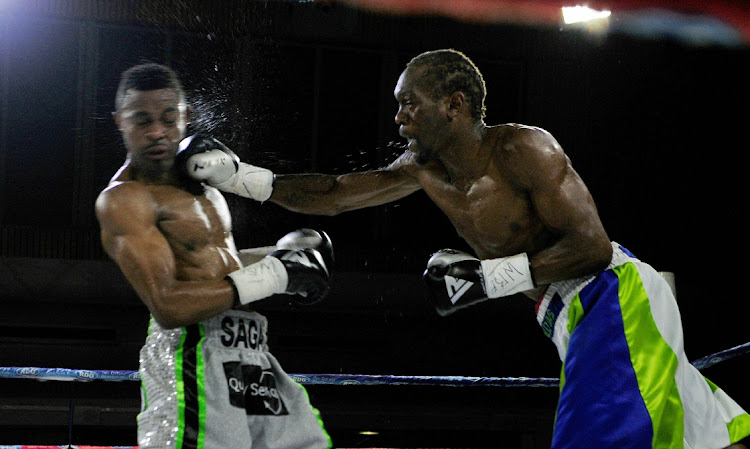 Title contenders for the SA middleweight boxing belt must leave reigning champion Nkululeko “Bulldog” Mhlongo alone if they still aspire to reach for the stars, warned promoter Andre Thysse yesterday ahead on Mhlongo’s fight against John “Section 29” Bopape in Durban on February 27.

Bopape from Alexandra, northern of Johannesburg, is rated no 3 in Boxing SA’s ratings for the January rankings. He blows hot and cold and when he’s hot, he is untouchable.

Thysse, the former SA and Commonwealth super middleweight boxing champion, was a ringside guest at Emperors Palace when his son Brandon fought his heat out against Mhlongo in 2017, but eventually lost by a stoppage in the 10th round for the national junior middleweight belt. Mhlongo vacated that belt after winning the middleweight strap with a stunning fourth-round stoppage of defending champion Walter Dlamini.

“Mhlongo can easily end a boxer’s career,” warned Thysse. “I don’t think there is anybody in the ratings to beat him in the middleweight division. There is Ayanda Mthembu (1), Dlamini (2), Bopape (3), Snamiso Ntuli (4), Ricky Tshabalala (5), Wade Groth (6) and Andile Mntungwa (7).”

Thysse maintains that Emmany Kalombo can still beat him but also at junior middleweights. The SA-based Congolese knocked Mhlongo clean out in the fifth round for the WBF Intercontinental title in 2018.

Brandon and Kalombo are trained by Damien Durandt, who has helped Brandon to win both the WBA Pan African and IBO All African junior middleweight belts. Mhlongo is under the guidance of trainer Vusi Mtolo.

“Brandon got slaughtered by Mhlongo; can he beat Mhlongo? I hope so but it will be a dangerous fight,” he admitted. “Put it this way, Bopape cannot beat Mhlongo. That guy is a workhorse; slow in the first two rounds, but once he gets warmed up he’s untouchable.”

The upcoming fight will headline a Starline Boxing Promotion’s bill that promoter Zandile Malinga said will be bankrolled by the KwaZulu-Natal government.

Bungu remembers Mnguni: 'Hlathi‚ tell me and be honest with me‚ are you going to really beat McKinney?'

The death of boxing icon Mzimasi Mnguni has robbed the sporting fraternity of a father figure who changed plenty of lives in the game.
Sport
1 year ago

‘Not even boxing titles as satisfying as a degree’