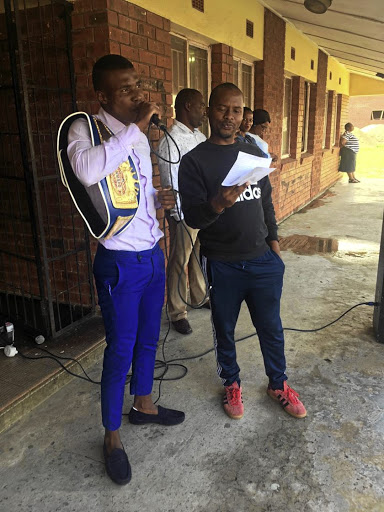 Boxing is treating Tholumusa Ngema like he is worth nothing when he actually holds a title that should afford him the respect and admiration that is enjoyed by other champions.

“I am facing scary darkness, which in my view is a curse,” he said yesterday. “I feel like I am being punished for a crime I did not commit. I thought winning that title would put Esikhawini back on the boxing map but I see now that I was inviting trouble to myself. I had thought some local businesspeople and [the] local municipality will realise that I have done something positive for my community and rally behind me.”

Ngema says he has not been challenged once and was therefore unable to defend his title and earn money. Luckily the boxer, whose only source of income is fighting, does not have dependents. The youngest of five siblings, and the only boy, says life is still difficult for him.

“Imagine being a man [and having] to rely on your sisters to buy underwear for you,” said Ngema, whose parents are pensioners.

“Some promoters have promised me fights but leave me out when they finalise their bills. I can’t force them; it’s their business. The love and passion for boxing is getting thinner and thinner with each day that passes because there is absolutely nothing happening for me even when I hold a belt.”

In SA, Ngema is rated No 3 in the bantamweight division, where Ronald Malindi rules with an iron fist as the national champion.

WBF president Howard Goldberg delivered the most debilitating blow yesterday when he said they have already vacated Ngema’s title.

“We gave every champion more or less six to 12 months grace because of Covid-19 because we don’t like to vacate them. It is the responsibility of a manager to find a promoter to stage a title defence,” said Goldberg.

Barend van Rooyen has been removed as the SA middleweight boxing champion on the recommendation of the SA Institute for Drug-Free Sport (Saids), ...
Sport
4 years ago