Challenge to be played in bio-bubble 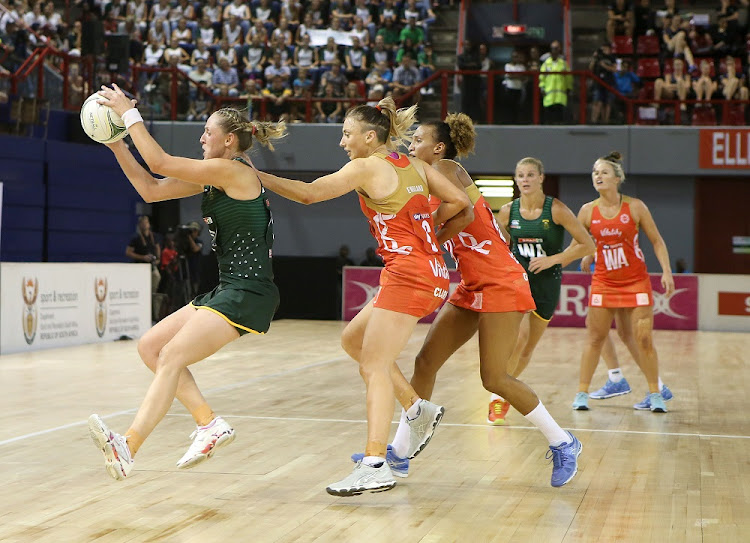 Erin Burger of the Spar Proteas (left) and Jade Clarke in action at the Netball Quad Series match between South Africa and England at Ellis Park Arena in Johannesburg.
Image: GALLO IMAGES

The Spar Challenge in Cape Town next month will mark the first major netball event in the country after Netball SA (NSA) announced resumption of its activities yesterday.

NSA had suspended its programme at the height of the ongoing Covid-19 pandemic's second wave.

With SA set to host Africa's first International Netball Federation World Cup in Cape Town in 2023, the SA senior netball team needs every opportunity it can get to prepare for the world championships on home soil.

In the Spar Challenge, the Proteas will compete against Uganda, as well as against Proteas Under-21 and SA President invitational squad on March 24-30. The tournament will be played in a bio-bubble. An invitation has also been extended to Namibia and NSA is hoping for a positive response from the neighbouring nation.

Last year NSA hosted three successful bio-bubble events in Free State, North West and Limpopo and NSA president Cecilia Molokwane is confident even the next one will go through smoothly.

"The decision to resume playing was not an easy one. We are still in a pandemic and have to be careful about how we conduct our business. We have put measures in place to protect the lives of everyone involved," Molokwane said yesterday.

She emphasised the need to keep the Proteas busy and sharp as 2023 approaches.

The participating teams in the Challenge will assemble in the Mother City for pre-training on March 19-23.

The City of Cape Town's mayoral committee member, JP Smith, said the city would create a safe environment for the players, coaches and officials.

"As the home of netball for the next three years up to the 2023 World Cup, it is an opportunity to prepare the city for the world championships in a safe environment. No one knows what the future holds," Smith said.

Netball activities in SA given green light to resume

Netball South Africa (NSA) has announced that their activities will resume with immediate effect.
Sport
8 months ago

Pandemic throws spanner in the works for SA netball

The second wave of Covid-19 has impacted negatively on netball in South Africa, leading to the cancellation of the Uganda series planned for Cape ...
Sport
9 months ago
Next Article