Prodigal son Fuzile is back home 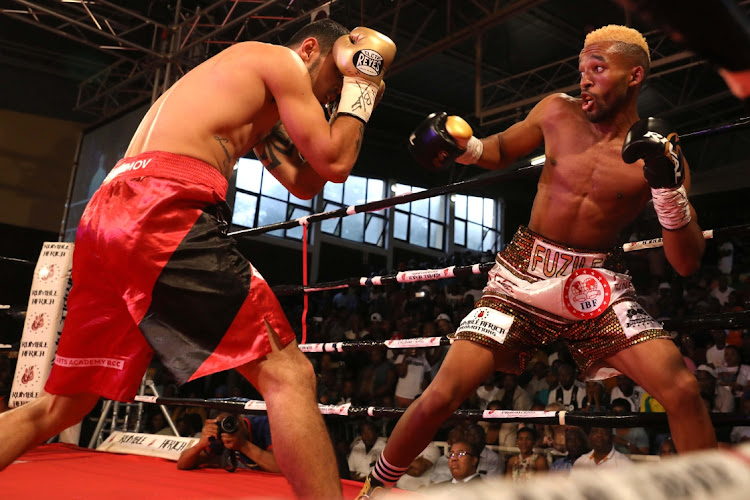 Azinga Fuzile dominated Shavkat Rakhimov as he built a healthy lead until he was floored twice in the eighth round of their IBF elimination clash at the Orient Theatre.
Image: ALAN EASON / Daily Dispatch

Azinga “Golden Boy” Fuzile has rejoined trainer Mzamo “Chief” Njekanye – the man who started training him from day one at the unheralded Duncan Village Boxing Club in the Eastern Cape.

“He rejoined me early this week,” confirmed Njekanye, who is in Johannesburg where he is preparing his other charge Xolisani “Nomeva” Ndongeni for a proposed fight overseas. Fuzile left Njekanye for top Gauteng trainer Colin “Nomakanjani” Nathan three years ago.

“I am excited. There is no way that as a parent I will not welcome my son when he wants to come back home,” said Njekanye, who guided the talented left-hander to the SA, WBC Youth and IBF Continental Africa featherweight titles in their 11 wins.

Under Nathan, Fuzile captured the IBF Continental Africa belt in the junior-lightweight division and produced a stunning fourth-round stoppage win over former multiple world champion Malcolm Klassen before tasting defeat against Russian Shavkatdzhon Rakhimov in an IBF elimination bout  in 2019. In total, Fuzile has eight knockouts in 14 wins.

Ndongeni also began his career under Njekanye, who helped him to win two SA titles in two weight divisions and a number of international belts before he joined Nathan, who guided him to victory for the WBA Pan African belt. Ndongeni left Nathan  and joined Sean Smith, and together they won the WBF strap.

Said Njekanye: “Whether he is still promoted by Rumble Promotions or not is not my concern, all I want to see is the boy prospering as a boxer. The bottom line is that the boy is back home where he belongs.”

Fuzile said: “Yes, I have rejoined Chief. I told Colin about my move and he was OK with it. There is no bad blood between us. My boxing style is getting lost so I felt I should go back to the person who knows and understands me even when I am in trouble during a fight. People must expect the Azinga who swept aside every single boxer he fought when he started with Chief.”

Nathan said: “Azinga came to see me on Tuesday and he said there are people who have promised [him] R20,000 as a retainer on condition that he left me to go back to Chief. But the unfortunate part for Chief is that I have a BSA agreement with Fuzile.”

Former SA junior featherweight champion Thato “Captain Charisma” Bonokoane has complained of what he called racial prejudice in Russia and has urged ...
Sport
1 year ago
Next Article