Hurricane says he's ready to leave the ring on a stretcher 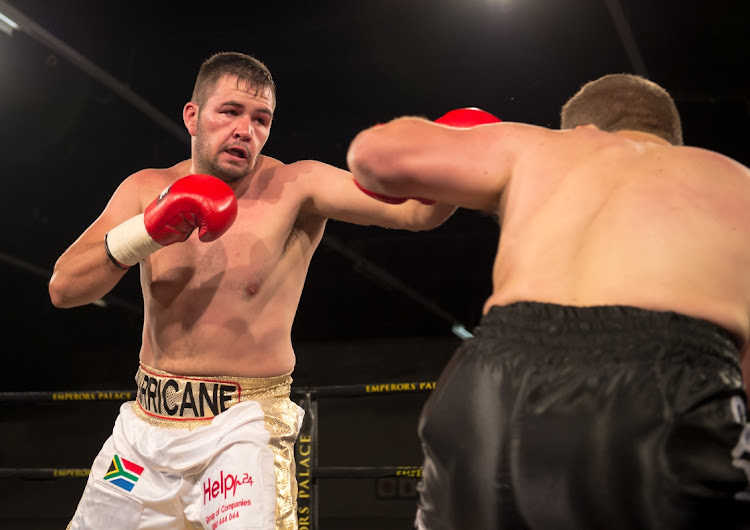 Johnny Muller in a fight against Herman Potgieter at the Emperors Palace
Image: Anton Geyser/Gallo Images

A war of words has already erupted between Akani Phuzi and Johnny “The Hurricane” Muller, setting a perfect tone to what could be the bloodiest local boxing match ever when up-and-coming prospect nicknamed “Prime” puts his WBA Pan African cruiserweight belt on line against Muller on December 19.

Veteran boxing promoter Rodney Berman will stage the fight at Emperors Palace where Muller handed Kevin “Two Guns” Lerena his only loss in 2014. Lerena was undefeated after 11 fights and expectations were that the left handed then prospect would brush Muller aside and march towards winning a world title.

But Muller refused to be a stepping stone and instead the tough-as-nails former SA and WBC International Silver light heavyweight champion derailed Lerena, who had to take a step back and meet Muller in their rematch fight.

Muller is on a comeback trail after a year break from the sport which saw him fight against some big names in the business that included former undisputed cruiserweight champion Oleksandr Usyk – the Ukrainian – who stopped Muller in round three in 2015.

Muller said he would have to be carried out of the ring on a stretcher on December 19.

"I will bring a stretcher,” promised Phuzi, who is going in there to improve his record, especially knockouts, to six in 12 wins.

“This is my everything,” warned Muller. “I will give my best; I am the challenger and I am gonna go like a lion who want something; I am gonna go for that title; I know it’s his but soon to me mine.

“I’ve always been like a type of guy who enjoys life too much. Now I’m at the time of my life where I take things seriously, business is serious and this is business. I’ve checked Akani out and he’s a proper boxer but I can box and fight whatever you bring to me, this is what I do. I believe in who I am, I am the best. Kevin Lerena tried to knock me out and I am the only guy to beat him. Akani has to carry me out of the ring.”

Muller has been stopped four times in nine defeats against 14 knockouts in 21 wins. Their fight will form part on the “December Detonation” card which will be headlined by Lerena against a yet-to-be- confirmed opponent.