Malcolm Klassen proves that his heart is not made of stone 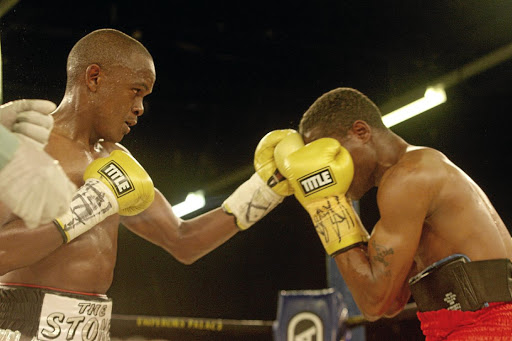 Malcolm Klassen connects with a left during his super- featherweight bout against Justin Savi at Emperors Palace.
Image: Veli Nhlapo

Whether it is maturity or humility, that is immaterial, the fact is that haughty former SA, IBF, WBF and IBO world boxing champion Malcolm "The Stone" Klassen has proven to be a caring and loving father.

He put his ego aside and found a job at the Kumba Mine in Kimberley to make sure that he puts food on the table for his children. This after ending his illustrious career in 2018.

The younger Klassen - who moved around in fancy cars - would not have made such a sacrifice.

He would hang on even when it had become clear that the curtain had finally fallen on his once glittering career.

"Man has got to do what he has to do to put food on the table," said the outspoken 39-year-old retired boxer from Toekomsrus on the West Rand, who refused point-blank to reveal the number of children he has. "Don't go there, please. The fact is that I am a father of children."

Klassen must be commended for his decision to get a job working with stone in the belly of the earth.

"I was scared going down at first but I am used to going deep down under the earth now," he giggles.

"That was a tough fight for me, not because Jack was great but simply because of the condition I was in," he said.

"I had terrible cramps. I am not sure if they were caused by the fact that I lost too much weight for that fight or it was the diet. I just fought for survival.

"Look, I knew that Jack would not beat me but the circumstances were just against me. If it was not for cramps, Jack would not have heard the bell going for the last round. I would have stopped him."

After losing by a stoppage to rising star Azinga "Golden Boy" Fuzile, the IBO Continental Africa junior-lightweight holder, on October 20 2018, Klassen hung up his boxing gloves. That was his second stoppage - the first being to Russian Shavkatdzhon Rakhimov for the IBO world title on February 10 2018 - against 34 wins, nine losses and two draws.

Coincidentally, Rakhimov also stopped Fuzile in September last year and earned the rights to challenge for the IBF title.

Klassen had previously held the IBF (twice) and the WBF titles. He produced an outstanding performance against Gary St Clair for the IBF belt in 2006 before losing it to Mzonke Fana in 2007.

Fana was dethroned by Cassius Baloyi, whose reign was cut short by Klassen in 2008. Klassen lost the belt to Roberto Guerrero before bouncing back to win the WBF strap in 2011.

Klassen began boxing as an amateur under Bokkie Martins but turned pro under Winston Mokone, who he left for Ralph Haynes. The boxer moved to Colin Nathan, Manny Fernandez, Nick Durandt, Gert Strydom, Sean Smith and Alan Safy before settling with Bernie Pailman.