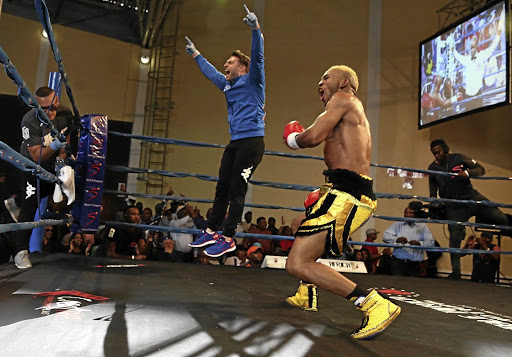 Trainer Colin Nathan celebrates with Azinga Fuzile after his charge defeated Malcolm Klassen at the Orient Theatre. Nathan is likely to be nominated for trainer of the year award.
Image: MARK ANDREWS

Nathan announced yesterday that the IBF championship committee has officially ordered Fuzile and No 4 contender Kenichi Ogawa, the 31-year-old Japanese, to be involved in an elimination bout.

The winner will earn the No 1 ranking and be the mandatory challenger for American champion Tevin Farmer.

"We have already accepted the fight and we are very much excited about the opportunity," said Nathan yesterday. His other boxer, Moruti "Baby Face" Mthalane, holds the same organisation's flyweight belt, which will be on the line against Masayuki Kudora in Tokyo on May 13.

"I am proud of this moment and am happy with how things are going. Once Ogawa accepts the fight, we will begin with negotiations but in the event they turn it down, the IBF championship committee will look for another opponent."

Azinga “Golden Boy” Fuzile cruised to a lopsided points win over Romulo Koasicha in his first defence of the IBF Intercontinental junior lightweight ...
Sport
3 years ago

The 22-year-old left-hander from Duncan Village, near East London, who is undefeated in 14 fights, said: "I am so excited. It really shows that we are moving forward.

I have no choice but to win the elimination bout because I want the actual IBF title so bad."

There was an outcry when Fuzile left longtime trainer Mzamo Njekanye for Nathan.

But Nathan has made an immediate impact. His first assignment with Fuzile was in October when the boxer stopped Malcolm Klassen in four rounds.

The 12-fight rookie won the IBF regional belt in December and a few days after that victory, Fuzile was awarded the No 6 spot.

He made his professional debut under Rumble Africa Promotions whose owner, Thembalethu Ntuthu, has stuck with the fighter since.

Fuzile had only one fight with Golden Gloves, when he demolished former two-time world champion Tshifhiwa Munyai in three rounds.

Regarding the boxer's future, Ntuthu said: "We are super excited and delighted because it is in line with our vision to develop boxers to become world champions. We think this will motivate other youngsters, [proving] that through hard work and dedication, anything is possible. We are hoping for the best. We will forever provide all the necessary support, even if they say he must go fight Ogawa in Las Vegas."

Meanwhile, Boxing SA's sanctioning committee has
ordered a rematch between Innocent Mantengu and
Thato Bonokoane after their fight for the vacant SA junior-featherweight title was wrongly declared a draw.

This was announced by chairperson Khulile Radu yesterday.

The regulations make it clear that there can be no draw in a vacant national title fight.

Radu said the rematch will go on a purse bid.