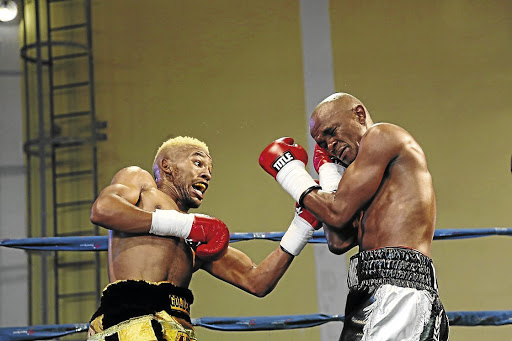 Azinga Fuzile, left, hits out at Malcolm Klassen during a bout that was named 2018 Africa's fight of the year by IBF. Fuzile is being prepared for a world title fight.
Image: MARK ANDREWS

East London boxing promoter Thembalethu Ntuthu has welcomed an award from IBF Africa, after Rumble Africa Promotions (RAP) was voted the most active in 2018.

But Ntuthu says the more pleasing honour will be to guide Azinga "Golden Boy" Fuzile to becoming a world champion.

Nthuthu's company was informed of its achievement this week, when it was also announced that the IBF Continental Africa junior-lightweight championship fight between holder Fuzile and Malcolm Klassen was voted as fight of the year.

That boxing match, between a 21-year-old with only 11 fights and a 37-year-old vastly experienced 45-fight veteran, was staged by Ntuthu's company at the Orient Theatre in East London on October 21 last year.

Fuzile was not given even the slightest of chances against the two-time IBF, WBF and IBO champion. But he pulverised Klassen into submission over four rounds.

"We are delighted about the achievement but I believe there is a lot we still need to achieve as a boxing promotion, such as guiding Fuzile to be a world champion," said Ntuthu.

"The task ahead is to host the IBF elimination bout between Fuzile and Kenichi Ogawa from Japan here in South Africa and ultimately stage the actual title fight here, which Fuzile must win to become the IBF world champion."

Manager satisfied with US training sessions.
Sport
2 years ago

Fuzile, who remains undefeated after 14 fights, is rated No 5 by the IBF. He will oppose No 4 ranked Ogawa in a fight to earn the No 1 spot and the rights to challenge IBF holder Tevin Farmer from the US.

CEO of RAP Nomfesane Nyathela said it was good and motivating to be recognised, especially when they had been doing tournaments out of their pocket for the past three years.

"We will be attending the IBF convention in Macau in May where we will be handed our award. This award comes at a time when Ogawa had accepted the fight against Fuzile. We will pull all the stops to stage [it] here at home," she said.

Ntuthu and trainer Colin Nathan would have had their heads decapitated by the fight public in East London had Fuzile lost to Klassen, because it did not make sense matching him with the man who boasts wins over the likes of Gary St Clair, Manuel Medina and Cassius Baloyi. But the sensational left-hander did a number on Klassen.