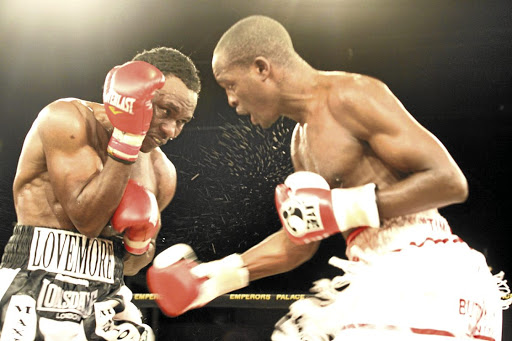 Philip Ndou throws an uppercut at Lovemore Ndou. Lovemore won the 12-round fight on a unanimous points decision to claim the IBO welterweight title at Emperors Palace in 2009. / BAFANA MAHLANGU

It was billed as "The young lion against an ageing elephant", a battle 11 years ago which saw self-exiled South African warrior Lovemore "Black Panther" Ndou collide with his namesake Phillip "Time Bomb" Ndou for the vacant IBO welterweight title at Emperors Palace.

The now 48-year-old Australia-based Lovemore was depicted by his namesake, home-grown favourite Ndou, as a traitor who'd quit his country for a life of comfort among the "whites".

The fight was expected to confirm the younger Ndou - no relation - as an unstoppable force and his grizzled opponent as yesterday's man.

But on July 11 2009, the mauler from Musina was reading from an alternate script as he captured a shock unanimous points decision to collect the second world championship of a career which saw him fight across continents and earn a reputation as one of the most durable competitors to emerge from Africa.

Talking from Sydney, Ndou - who subsequently swapped hooks for law books to become a successful solicitor - sees his homecoming back then as akin to the return of a prodigal son, seeking to win the approval of a sceptical public.

"For me, it had shades of the prodigal son fable, the only difference being that in my case I had not been extravagant, nor was I poor and destitute when I came home," he said.

"But I hadn't fought in SA in 14 years and just like the prodigal son, I felt a sense of repentance. I'd come to beg my own people to embrace me as one of them again.

"My opponent wasn't helping by branding me as some kind of turncoat who'd chased fame far away from home. His verbal jabs gnawed like an open sore. He was calling me old and telling me I was more suited to a rocking chair than the ring."

A duel already textured with the intrigue of youth versus experience - Philip was 30 and Lovemore 37 - took on an extra dimension of spite.

"According to Phillip, I no longer belonged among Nelson Mandela's people," added Lovemore.

"He was doing his damnedest to convince everyone to believe that crap every time he got an opportunity to speak to the media. And it was getting under my skin. But just like the prodigal son parable, to my surprise, I did not need to beg to be accepted and was not scorned by my people.

"They welcomed me with open arms and agreed that my move overseas had helped put SA on the world map, not least because I'd won the IBF world light welterweight title two years earlier."

The pair had a connection stretching back to their years growing up as part of the Vhavenda tribe in the country's far northern part of the Limpopo province.

"It was challenging psychologically to prepare because I'd known Phillip since he was a little boy," added Lovemore.

"Back in the amateurs, he was a callow and respectful teenager who looked up to me and sought my counsel during my time as the captain of our regional boxing team. But 13 years on, as the undisputed pound-for-pound champion of SA and a fighter of the year on numerous occasions, he was intent on taking me down."

Spared the ravages which leave too many fighters with failing faculties post boxing, Lovemore has swapped the ring for the courtroom and is also human rights activist and Hall of Fame inductee.

"My days of boxing are over and I don't miss them one bit," he mused.

Belated honour for father of boxing in Limpopo (88)

Ndou hangs up his gloves

Highly educated boxer and former world champion Lovemore "Black Panther" Ndou has hung up his gloves, bringing the curtain down on an illustrious ...
Sport
6 years ago

Ndou bout with Nazareno could be his final bow

Australia-based boxer Lovemore Ndou, pictured below, makes a comeback in his adopted home against Filipino Dan Nazareno jnr in what could be his ...
Sport
6 years ago
Next Article