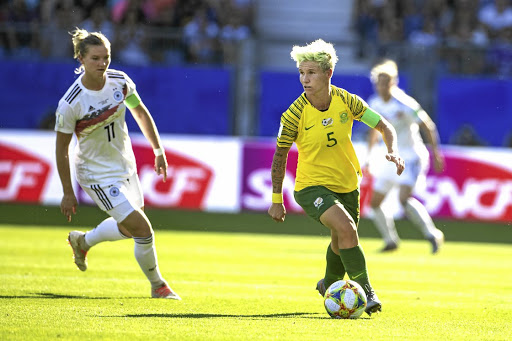 Banyana Banyana captain Janine van Wyk, 32, is determined to prove that age is just a number, revealing she could still ply her trade abroad.

While the task at hand is to aid Banyana retain their Cosafa Cup and qualify for next year's Olympics in Tokyo, Japan, Van Wyk has disclosed that her World Cup display has earned her interest from various clubs abroad.

"There have been some few contacts overseas after the World Cup," Van Wyk said, on the sidelines of the Cosafa Women's Championship launch and draw at the regional football body's offices in Randburg yesterday.

"I will continue to serve my country. We have the Olympics qualifiers coming up as well, but here and there I am in contact with overseas clubs. but nothing to be mentioned just yet, because I need to see what will happen this year with Banyana."

Van Wyk, who captained Banyana at their maiden World Cup in France last month, is on the books of her own club JvW, having left US side Houston Dash last year.

The Cosafa Women's Championship will be staged in Port Elizabeth in Eastern Cape province from July 31 to August 11. Banyana are pitted against Malawi, Madagascar and debutants Comoros in Group A.

"This tournament [the Cosafa Cup] is very important for us because we have not won a game in 2019. I think this kind of tournament will allow us to boost our confidence once again, knowing that we're the defending champs,'' Van Wyk stressed.

"Yes, there will be pressure on us, because people have their eyes on us especially after coming back from the World Cup. They are looking at a team that played at the highest level and they are looking for good football.''

Zambia, Namibia, Botswana and Mauritania will battle it out in Group B. Zimbabwe, Mozambique, Angola and eSwatini face-off in Group C.

This year's edition also includes the inaugural Under-20 women's competition, boasting eight nations. SA are grouped with Namibia, Zimbabwe and Malawi in Pool A. Botswana, Zambia, Tanzania and eSwatini are in Group B.