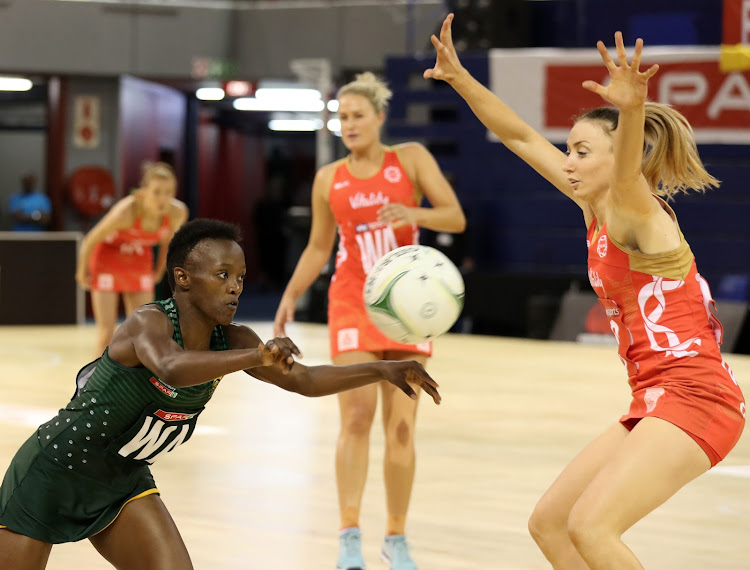 South Africa captain Bongiwe Msomi is confident the team will do well at the Netball World Cup in Liverpool, England.
Image: Muzi Ntombela/BackpagePix

The nation's sports lovers are still in mourning after the SA men's under-20 side‚ Banyana Banyaya and the senior men's national cricket team performed at their respective World Cups this month‚ plunging the different sporting codes into the depths of misery.

The SA under-20s and Banyana exited their respective World Cup tournaments at the first hurdle without a win while the Proteas were eliminated from the race to the semifinals with two matches still to be played.

To pile on the misery‚ Bafana Bafana began their Africa Cup of Nations (Afcon) campaign with a deflating 1-0 defeat to Ivory Coast a few days go and put their chances of progressing to the next round in danger.

The Netball Proteas departed for the World Cup a few days ago and they have tricky matches against Jamaica‚ Fiji and Trinidad and Tobago in Group C.

Msomi said unlike the other national teams‚ they would challenge for a medal in Liverpool.

“It is actually a nice thing to see that we are the hope of the country but that is not going to put any pressure on us.

"We have worked very hard to be where we are‚ actually I think that as a team we deserve better.

“We are at a point where we are excited to go to the World Cup to compete and fight for the title compared to going and knowing that you are going to get thrashed.

"We are very much excited and if there is any other year to step up on court it is this year.

The SA team will have a training camp in Wales and also play two friendly matches before the tournament.

Coach Norma Plummer shared Msomi’s sentiments by adding that they are not going to the UK to add numbers.

“We want to go for a medal‚ in fact every time we go on court we go for something positive‚” said the experienced Plummer who coached Australia to two World Cup triumphs in 2007 and 2011.

“When I think back to 2015 when I arrived‚ I realized then that there is great talent in SA and we could do some damage if given time to build up.

"The fact that Netball South Africa did put the Proteas in a quad series‚ which was expensive‚ is paying dividends.

“The fact I have been able to field players that are playing in top competitions around the world like Australia‚ New Zealand and England‚ where they play against other big names‚ has been good for our preparation.

"You have no idea how important for our preparations that has been because I don’t get that many camps.

"They need to be playing in those high pressure games and that plays an important role for the build-up.”