Nadal turning the improbable into reality 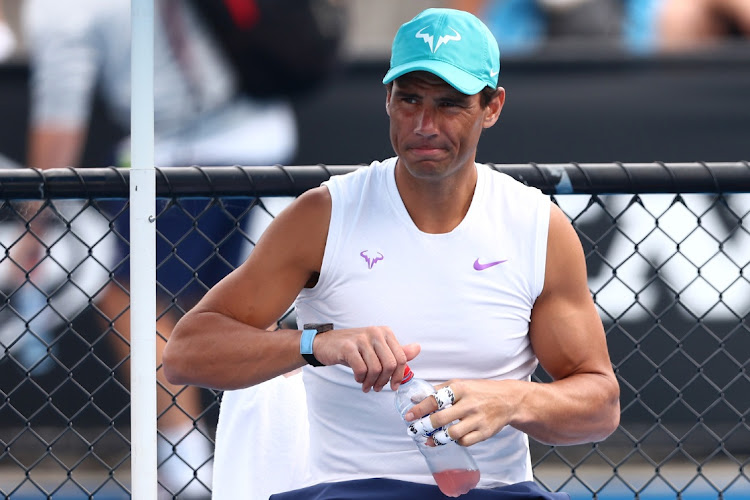 Rafael Nadal of Spain looks on during a practice session during day 13 of the 2022 Australian Open at Melbourne Park on January 29, 2022 in Melbourne, Australia.
Image: Clive Brunskill

Almost five months after Rafa Nadal posted a photograph of himself on crutches after a medical procedure, the 35-year-old Spanish great is within range of his most improbable triumph.

Nadal, who will play Daniil Medvedev in the Australian Open final on Sunday, will become the first man to win 21 Grand Slam titles if he defeats the Russian in Melbourne.

On the court alone, it is an immense task.

Medvedev is a decade younger. He is a dominant player on hard courts and also won their most recent clash at the ATP Finals in 2020.

“If I'm not able to play at my top level, (I) simply will be no chance,” Nadal said.

But the fact that he has a chance at all is remarkable when one considers a photograph of Nadal from September on the day Medvedev was booking a spot in the U.S. Open final.

Nadal posted a picture of himself on Sept. 11 leaning on crutches after treatment on a foot that has hindered him since he was a teenager.

On the same day, his great rival Novak Djokovic moved to within one win of completing the calendar Grand Slam with a five-set triumph over Alexander Zverev at Flushing Meadows.

Certainties do not exist in sport. But the odds that it would be Nadal instead of Djokovic being the first to 21 major titles seemed a distant prospect at very best that day.

The march of Djokovic appeared inexorable at a time when there were significant doubts about Nadal and the still sidelined Roger Federer ever regaining peak fitness and form.

Only Medvedev could have stopped the Serbian from taking Manhattan and marching into Melbourne, which had been at Djokovic's mercy for much of the past decade, seeking major title number 22.

The twist in the script since Sept. 11 would seem too absurd for even a fantasist to consider.

Djokovic would be denied by Medvedev in straight sets in New York and then deported from Australia ahead of his title defence in Melbourne Park.

Nadal, after also falling ill with Covid-19 in December, would manage to return fit and firing at the Grand Slam where he has endured the most problems in his career.

To borrow a favourite phrase from another great left-hander in John McEnroe: “You cannot be serious”.

A victory over Medvedev at Rod Laver Arena would complete a remarkable chapter in Nadal's extraordinary career.

He said after defeating Italian Matteo Berrettini on Friday that he could not have imagined playing in the decider in Melbourne when he arrived at the start of the month.

“For me, it's something completely unexpected, so I am super happy,” Nadal said.

“Of course everybody knows me and I am always gonna try my best. Of course my goal now is to win.”

He remains the outsider according to Australian bookmakers, but the left-hander's reputation for defying the odds has only been enhanced by his run in Melbourne.

The injury and illness aside, he also managed to rebound when looking beaten by the heat and the sizzling shots struck by Denis Shapolov in the quarterfinals.

Medvedev ruined Djokovic's dreams in New York. He is spoiling to do the same against Nadal.

But no matter how the final unfolds, the Spaniard is relishing just having the chance.

“In my case, I think I have been able to enjoy it probably more than the others, because for a lot of times I was close to not being able to do it again,” he said.

An Australian Open that began with an unprecedented saga involving reigning champion Novak Djokovic will finish with a historic flourish on Sunday ...
Sport
6 months ago

Rafa Nadal survived a mammoth first-set tiebreaker before going on to beat fellow lefty Adrian Mannarino 7-6(14) 6-2 6-2 and reach the quarter-finals ...
Sport
6 months ago

Rafa Nadal remained on course for a men's record 21st Grand Slam title after winning a battle of left-handers against Adrian Mannarino 7-6(14) 6-2 ...
Sport
6 months ago
Next Article