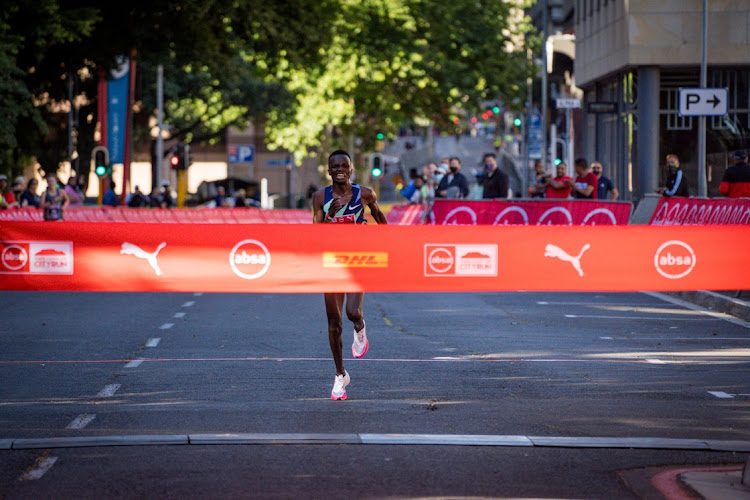 Kenya completed a clean sweep in the Absa Cape Town 12km City Run, with Daniel Ebenyo and Jesca Chelengat clinching the men’s and women’s races in windy conditions in the Mother City yesterday.

Ebenyo made it look easy as he destroyed the field in the men’s race to cross the finish line in 34:02 to bag the winning prize money of R25,000.

His countryman Isaac Kipkemboi made it a one and two finish when he finished second in 34:43, taking home R17,000.

Celebrated long-distance sensation Stephen Mokoka was the first South African to cross the line in third place in 34:46, walking away with R13,000.

Melikhaya Frans secured fifth place in 35:12, while last month’s Durban 10km City Run winner Precious Mashele ran out of gas to finish in eighth place with the time of 35:17.

Pre-race favourite Chelengat lived up to expectation, winning the women’s race in 40:01, followed by Neheng Kathala of Lesotho in second place in 40:15 with Diana Chesang of Kenya in third place with a finish of 40:25.

Glenrose Xaba was the first local woman runner to cross the finishing line in fourth place at 40:59 during tricky weather conditions.

Kesa Molotsane secured fifth place in 41:37, followed by Irvette van Zyl in sixth place with 41:52 after dropping out from the leading bunch.

Ebenyo led from the gun to the tape with a blistering run as the others dropped out of the fast pace one by one.

“The race was good, but there was too much wind in the last 7km. The weather made it difficult for me to run my normal race. I could have shattered the record. I love SA. It is like a home away from home,” said Ebenyo.

Chelengat said the wind denied her a good race and she wanted to run a faster time. “It was too windy, and the route had many hills. It was a challenging race because of the weather. When I saw Neheng, I took the initiative and broke away for the win,” she said.

Olympian Precious Mashele has had a season to remember and he will look to end it with a bang at the Absa 12km City Run in Cape Town on Sunday.
Sport
2 weeks ago

Road runner Kesa Molotsane juggles her running career, employment at University of the Free State, and a role as board member of Athletics SA with ...
Sport
2 weeks ago

Stephen Mokoka and Lesotho’s rising star, Neheng Khatala will be heading to Cape Town for the Absa Cape Town 12K CITYRUN on November 21.
Sport
3 weeks ago
Next Article