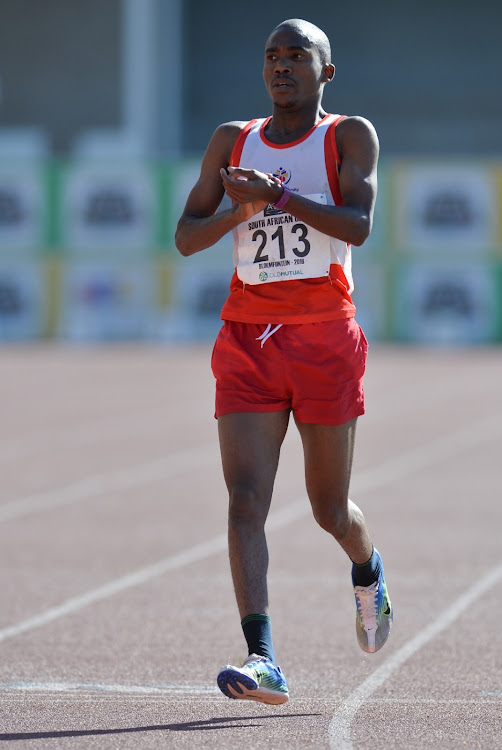 “If he takes care of himself, respects his coach and the training group, he will go places next year. This boy will dominate the short races next year. He is in great shape, he works hard, and he is a disciplined runner. He is coming okay and takes his career seriously,” Seme told Sowetan yesterday.

Mulaudzi is the Cape Town Marathon champion Stephen Mokoka’s training partner, and he learns a lot from the marathon sensation.

“Mokoka will shift his focus more on the marathon next year, and that will allow Collen to get more [shorter] races to dominate. Mulaudzi must listen to his coach and teammates and put in the hard work. The boy wants to go far, and we prepared to help him to achieve his goal.”

Meanwhile, Seme has also confirmed that Glenrose Xaba was no longer part of the Sponge Group, as his team is known. Xaba is now coached by former 800m Olympian champion Caster Semenya.

“Xaba has moved on with Caster, and I wish her everything of the best," Seme said.

Mokoka will run the City Run 12km in Cape Town on November 21, and Seme hopes it will be his final short race.

“There is a shortage of races, and we agreed that he must accept the invitation to run in Cape Town. But the focus should be on the long distance races next year,” added Seme.

Forget about the Athletics SA (ASA) awards and prepare athletes to deliver medals on the world stage. That it is the strong message from the ...
Sport
8 months ago

Stephen Mokoka and Lesotho’s rising star, Neheng Khatala will be heading to Cape Town for the Absa Cape Town 12K CITYRUN on November 21.
Sport
9 months ago

Veteran runner Stephen Mokoka is hoping to beat his 33min 34sec personal best in what he’s expecting to be a quick Absa Cape Town 12K City Run on ...
Sport
9 months ago
Next Article