Djokovic disqualified from US Open after accidentally hitting official with ball 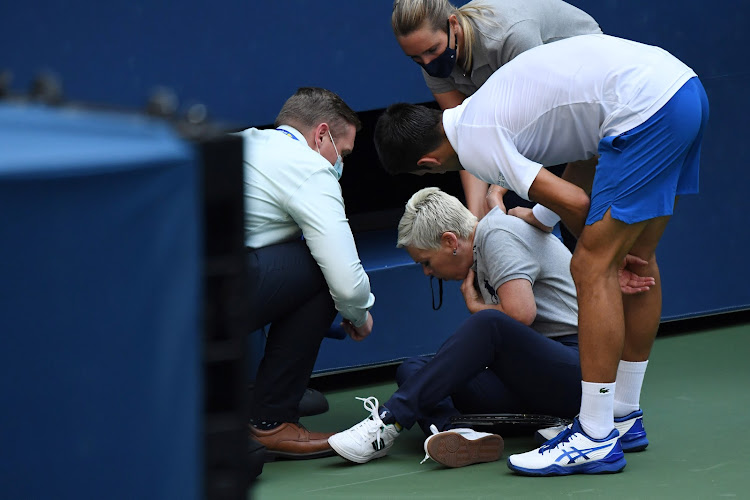 Novak Djokovic of Serbia and a tournament official tend to a linesperson who was struck with a ball by Djokovic against Pablo Carreno Busta of Spain on day seven of the 2020 U.S. Open tennis tournament at USTA Billie Jean King National Tennis Center.
Image: Danielle Parhizkaran-USA TODAY Sports TPX IMAGES OF THE DAY

A petulant swipe at the ball after having his serve broken brought a sensational end to Novak Djokovic's US Open on Sunday after the world number one was disqualified for striking a line judge in the throat.

The dramatic moment came when the overwhelming title favourite reacted angrily to going 5-6 down to Spain's Pablo Carreno Busta in the first set of their fourth-round encounter at an empty Arthur Ashe Stadium.

What would have been an innocuous incident had the ball flown a foot either side of the official instead left her lying on the ground, clutching her throat and screaming in pain.

There was no question that Djokovic hit her inadvertently, and he quickly rushed to apologise, but it was a clear breach of Grand Slam rules forbidding the physical abuse of anyone within the tournament precincts.

Tournament referee Soeren Friemel came out and spoke to chair umpire Aurelie Tourte and Andreas Egli, the Grand Slam supervisor, before a long chat with the three-times U.S. Open champion.

Djokovic, who was clearly making the point that he had not intended to hit the official, was overheard saying "she doesn't have to go to hospital for this" but after 12 minutes of pleading his case his fate was sealed.

"I don't think that there was any chance of any opportunity or any other decision than defaulting Novak," Friemel later told reporters.

"The facts were so clear and so obvious ... (the line judge) was clearly hurt and Novak was angry, he hit the ball recklessly, angrily back."

A tournament spokesman told Reuters the line judge appeared to be okay and was "not brought off-site". Her identity is not known.

Djokovic eventually walked over to shake hands with a stunned Carreno Busta and trudged off the court before leaving the grounds without attending a press conference.

The 33-year-old Serbian later posted an apology on Instagram.

"This whole situation has left me really sad and empty," he wrote. "I'm extremely sorry to have caused her such stress. So unintended. So wrong.

"I apologise to the (U.S. Open) and everyone associated for my behaviour."

Extraordinary even in a year when the coronavirus pandemic has wreaked havoc in the sporting world, the disqualification ended Djokovic's 26-match winning streak in 2020 and what, at times, looked like a charge towards his 18th Grand Slam title.

That would have brought him within one title of Rafa Nadal's tally of 19 and two of Roger Federer's record 20 major triumphs.

The USTA said Djokovic would lose all the ranking points earned from the event and be fined $250,000 -- his prize money for reaching round four.

Consensus among former champions turned pundits and his fellow players was that Djokovic had accidentally hit the line umpire but, while unfortunate, the decision to disqualify him had been correct.

"It's the right decision," Tim Henman, who was disqualified from Wimbledon for a similar incident in 1995, told Amazon Prime.

"He is not aiming for the line judge, but has hit the ball away and you have to be responsible for your actions."

With defending champion Nadal and Federer absent this year and no other former winners of the major four tournaments left in the men's draw, Flushing Meadows is now guaranteed to welcome a new member into the Grand Slam champions club.

Djokovic's humiliating exit continues what has been a turbulent few months for him off court. He was criticised for organising the Adria Tour exhibition event in June in which he and several players were tested positive for COVID-19.

He then dropped a bombshell on the eve of the U.S. Open by announcing he had resigned as president of the ATP Player Council to front a new players' association.

"I need to go back within and work on my disappointment and turn this all into a lesson for my growth and evolution as a player and human being," he added in his Instagram statement.

World number 27 Carreno Busta moves on to a quarter-final against Canadian young gun Denis Shapovalov with both players knowing they have never had a better chance of snaring a maiden Grand Slam title.