Community pleads with public protector to save their school 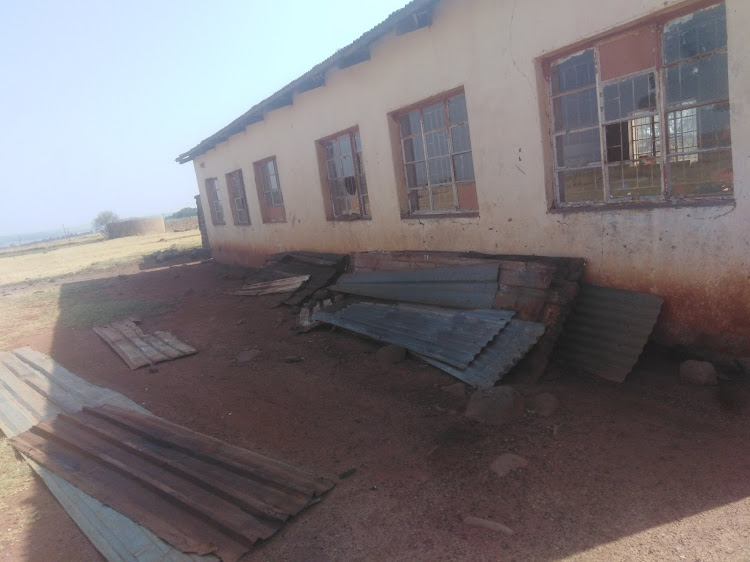 Mokibe Primary School on the outskirts of eMalahleni is in a dire condition but the community it services believes it can be saved.
Image: Naledi Shange

The community of Kwaarspruit, which falls under the Manala Mgibe tribunal authority in Emalahleni, has put its hopes in the hands of public protector Busisiwe Mkhwebane to save their dilapidated school.

Mkhwebane and her deputy Kholeka Gcaleka had visited Mokibe Primary School on Friday to assess it after it made headlines for being in a dire state.

The rundown structure, on a farm, is empty after pupils were taken to other schools in June after a directive issued by Mpumalanga premier Refilwe Mtsweni-Tsipane. She found the school to be non-conducive for pupils.

But despite its shabby condition, allowing rain to pour into classrooms and the sun making it unbearably hot in the zinc structures in summer, the community is pleading with the government to keep the school open.

“This school is our legacy ... It was built by a white farmer who said that he wanted to accommodate all the children in the area. I went to the school and my children went to this school. It may look bad but we, the community would come and clean and take care of the school ourselves,” said community leader Oupa Mashiane.

This is what Mokibe Primary School looks like from the exterior. The community say these classrooms cater for around 600 pupils! @TimesLIVE counted about 7 classrooms on the premises. pic.twitter.com/R5be185XQj

“I even built this classroom myself with the help of other community members after the old one was blown away by the winds,” Mashiane added, as he pointed to a zinc structure with holes and an uneven, partially concreted floor.

The seven classrooms on the premises catered for about 600 pupils, some of whom come from neighbouring informal settlements. They arrive by bus.

Only about 28 of the pupils live close to the farm. It was for this reason that it was decided that the school would be rebuilt closer to informal settlements to cater for the majority and save on travel costs.

Three pit latrines stood empty, their rusty doors falling off the hinges. A large pile of metal, broken tables and chairs occupied one side of the property.

These are the classrooms of Mokibe Primary School outside Witbank. Some community members joined Public Protector Busi Mkhwebane as she inspected the school on Friday. They believe it can be saved, saying this school is part of their legacy. @TimesLIVE pic.twitter.com/UXxso4bLq8

But seemingly undisturbed by the conditions, Mashiane highlighted that there was no saving on government’s part by moving pupils away.

“I don’t see how there is any cost cutting when buses still come here each day and fetch our children and take them to other schools which are on the other side of town,” he said.

The school was not always in this condition, said Mashiane, saying the bare dry land had once been filled with flowers and was well maintained.

This is what the inside of one of the classrooms look like at Mokibi Primary. The pupils have been moved but large amounts of strationary and workbooks have been left behind. Some of these have never been utilized before. @TimesLIVE pic.twitter.com/XGQQQ3iLt9

“One thing I am begging for is for the government to assist us in rebuilding this school or bring mobile containers and park them here. We will take care of it,” he said. Should the government decide against this, he said, the new school should be called by another name as this would always be Mokibe Primary to the community.

Khabo Mtshweni was among the community members who had gathered at the school upon hearing of Mkhwebane’s visit.

“I have a six-year-old child who is in grade 1 and was attending school right here,” she said. “It’s been tough since the school was shut down because she has to wake up earlier and then go wait at the bus stop for the bus to take her to school,” she said. “I am always anxious and I agree that this school should rather be fixed than be closed,” Mtshweni added.

Kroon Mthombeni is a security guard at the school and has still been reporting for duty, despite there being no pupils or teachers. “I attended school here and then I started working here in 2016 as a night guard. I don’t think this school should be shut down,” he said.

“The parents from other areas prefer this school because it is outside the township, so there are no drugs and other things which happen at these developed schools,” said Mthombeni.

Mkhwebane told the community that her office would intervene and hopefully a solution could be reached between themselves, the premier and education department.

Mkhwebane said plans to build a new school had been put on hold after the community invoked the Communal Property Associations Act and refused to give its land to government to build the new school.

She expressed concern that some schoolchildren living on the farms had stopped attending classes after the relocation.

Mkhwebane has also visited hospitals and schools in Gauteng and Limpopo. After these visits, her office plans to report on how to better the health and education systems in the areas.

Parliament is struggling to put together a three-member panel that would kick off an investigation into whether public protector Busisiwe Mkhwebane ...
News
1 year ago

The People's Dialogue founder Herman Mashaba said he would open a criminal case over the “leaking” of a draft report by the public protector into ...
News
1 year ago
Next Article