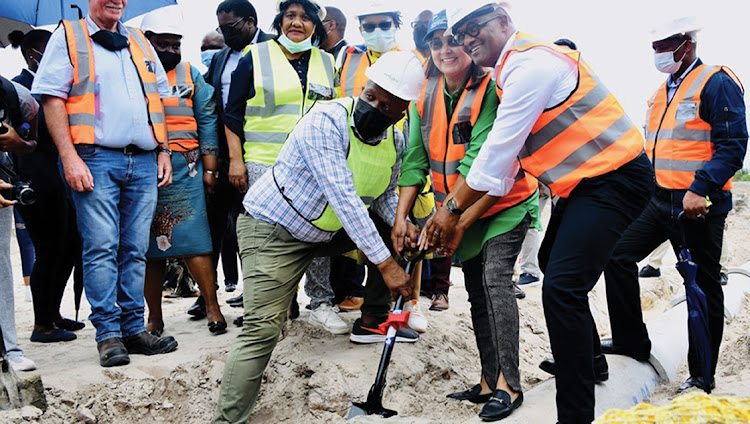 Minister in the Presidency Mondli Gungubele and the Minister for the Department Public Works and Infrastructure (DPWI) Patricia De Lille conducted a sod turning during an oversight visit of the housing construction site in the N2 Nodal Development in Gqeberha, Eastern Cape.
Image: Vukuzenzele

An Eastern Cape mixed-use development has been earmarked by the government as a catalyst for the region's economic growth.

The N2 Nodal Development project in Gqeberha is bringing development in the form of housing, a hospital, and the biggest mall in the Eastern Cape.

The R551m development is creating employment for artisans such as Phakamani Ntantiso, 34, who is the junior foreman of a housing development project for Ikhono Techni.

"I supervise the work being done by the different teams here, such as the team putting in the stormwater drainage," he says.

Masakhane Swelindawo, 32, has secured a construction job, also thanks to the N2 Nodal Development, and is happy to be able to send money home to his child and his mother in Elliotdale, nearly 500km away.

"This project allows me to feed my family. It has also taught me skills that I have used to develop my home and community," he says.

Ntantiso and Swelindawo are two of the 86,956 people employed during the construction phases of the three-phased development project.

The first phase was the construction of the Baywest Mall by the Billion Group company, led by businessman Sisa Ngebulana.

"The mall currently employs over 2,800 people. During the construction phase, it employed 6,900 people," Ngebulana says.

The N2 Nodal Development has been approved as a strategic development for social and economic upliftment and is a priority human settlement and housing development area (PHSHDA) and a strategic integrated project (SIP 24e), says public works and infrastructure minister Patricia de Lille.

This has enabled the development to become part of the infrastructure investment plan, which is a pipeline of infrastructure projects across all three spheres of government, state-owned entities, and the private sector.

Infrastructure development is an integral part of the economic reconstruction and recovery plan announced by President Cyril Ramaphosa in October 2020.

De Lille, who is also chairperson of the presidential infrastructure coordinating commission (PICC) secretariat, says the designation of the project as a PHSHDA and SIP 24e has allowed the Nelson Mandela Bay metropolitan municipality to get funding approval from National Treasury for the bulk infrastructure projects.

Minister in the presidency Mondli Gungubele says a catalytic project such as the N2 Nodal Development is of strategic importance to the economic recovery of the country.

"The project has the potential to transform the spatial and social landscape of the local area and help stimulate the local economy," he says.

The executive director of human settlements in the Nelson Mandela Bay metro, Tabiso Mfeya, says the construction of houses will lead to the construction of a planned private hospital; schools; large-scale retail, commercial, and office facilities; and light industrial zones and warehousing.

He says the housing being built will include subsidised mixed housing and state-funded housing.

The project is delivering jobs and ensuring that the SMMEs in the municipality benefit, says Mfeya.

The Richtersveld Community Property Association (CPA) in Alexander Bay in the Northern Cape is reaping the benefits of government’s land reform ...
SebenzaLIVE
2 months ago

Carmen Mathlakola is one of the ambitious young engineers who are working on building Rea Vaya bus stations in Gauteng.
SebenzaLIVE
2 months ago

Here's how to turn your artistic ideas into a profitable business

Business and Arts South Africa (BASA) and the Department of Sport, Arts and Culture launched the Debut Programme on 15 November 2021, to provide ...
SebenzaLIVE
5 months ago

Former businesswoman Nowinile Majola (53) has become a successful small-scale farmer in Mhlanga village in the Eastern Cape.
SebenzaLIVE
6 months ago
Next Article