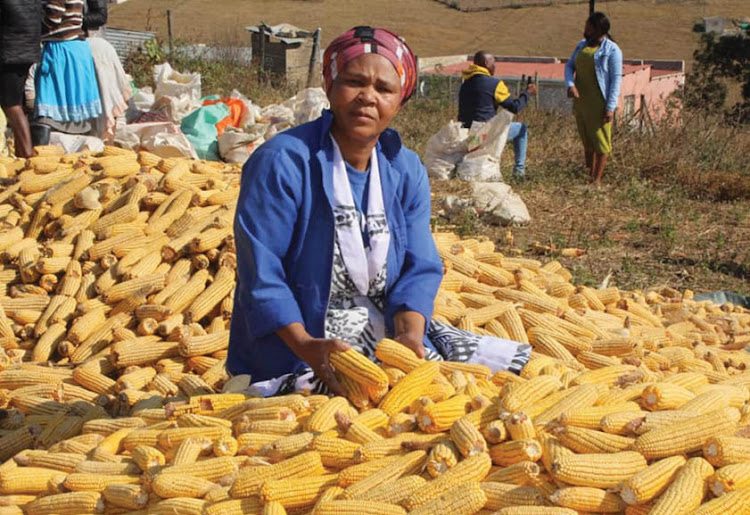 Nowinile Majola with maize that her cooperative grows.
Image: Supplied.

She is part of the Majola Agricultural Primary Cooperative that has four other members and sells maize and beans to businesses as far afield as KwaZulu-Natal.

The cooperative received support from the Eastern Cape Department of Rural Development and Agrarian Reform (DRDAR) and the Alfred Nzo District Municipality.

Majola initially started a small garden project on a piece of community land.

When her crop yield proved to be much larger than she anticipated, she was able to sell some produce in her community.

In 2015, she formed the cooperative with four other members. They farm on 10-hectares of land leased from the local chief and employ seven casual workers. Due to its growth, the cooperative has also been able to purchase a maize sheller and a bakkie to deliver produce to local markets.

“To work the forefathers’ land has always been my dream. Now, I’m ready to pass the baton to my kids, to go forward with farming,” says Majola, who has also started a project to help feed other families.

The cooperative aims to stop poverty and prevent crime by encouraging youth to take part in agriculture.

Majola says this is so that young people can provide for themselves and become entrepreneurs.

Anele Jojo, the Agriculture Development Technician for DRDAR at Alfred Nzo District Municipality, says the department is also developing farmers by helping them to negotiate offtake agreements. “We help the Majola Agricultural Primary Cooperative with production inputs, mechanisation and accessing the markets.”

The district municipality assisted the cooperative with fencing.

“This was a great help as livestock tend to be a problem when the fields are not fenced,” says Majola.

For more information, contact the Department of Rural Development and Agrarian Reform at 0800 203 025 or visit www.drdar.gov.za.

After many failed business ventures Mashigo has finally found success

Lebogang Mashigo (30) of Mandlethu village in Mpumalanga is a resilient farmer who has seen it all.
SebenzaLIVE
1 month ago

In the face of language barriers, poor healthcare and illiteracy, South Africans are at risk of not accessing necessary medical information.
SebenzaLIVE
1 month ago

One Monday morning in 2019, unemployed Kholofelo Masha packed his bags, left his Mpumalanga home and headed to Johannesburg for greener pastures.
SebenzaLIVE
1 month ago
Next Article