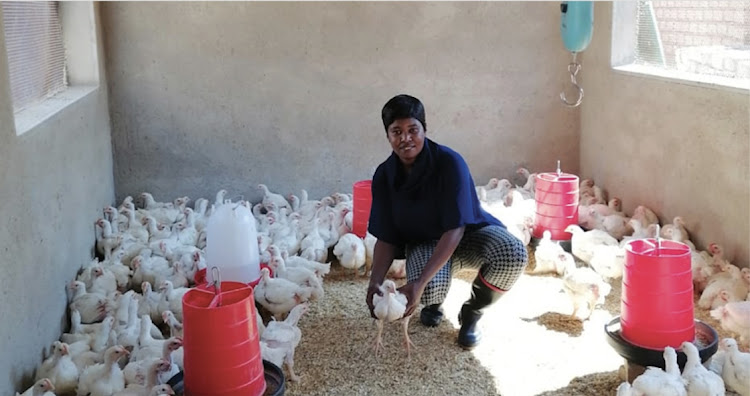 Maseko, 32, from Ekangala in Pretoria, is the owner of Gugulam Poultry House. She started in January 2018 with only 50 chickens.

Her business has grown and she is now producing 300 chickens per cycle.

“I raise broiler chickens from one day old until they are ready at six weeks. The increase in production has been an impressive improvement. I now want to get into major commercial farming, as I have grown through experience,” she says.

In 2017, Maseko attended the Am I Preneur business development programme, offered by the Gauteng provincial government and sponsored by Sasol.

The focus of the programme was acquiring business skills and developing an entrepreneur’s mindset.

“During training, the idea of a poultry business came to me. After the training, I implemented the idea. I saw there was a gap in the market for fresh farm chickens and an opportunity to start small,” Maseko explains.

The programme gave Maseko seed funding of R15,000, which she used to buy equipment.

Thanks to support received from the National Youth Development Agency (NYDA), Maseko was able to build better accommodation for her chickens.

“In the shack, I struggled with a high mortality rate and it leaked when it rained. The funding helped a lot,” she says.

Maseko supplies live and slaughtered chickens to households in her community. “My space only allows me to grow 300 chickens per cycle. This is not enough to meet the demand.

"I am also working on increasing supply to other segments, like shisanyama, restaurants, churches, schools and resellers."

She says her long-term plan is to lease a farm and expand her business.

Letlhogonolo Motseeng (34) went from selling grilled chicken feet and gizzards outside shebeens, as a boy, to owning Moja Chicken, with six ...
SebenzaLIVE
1 month ago

Chicken farmer teaching others to earn a living

Ntsako Shipalana is not only a successful chicken farmer, she is also giving back to the industry by training others.
SebenzaLIVE
4 months ago

When Beverly Mhlabane took a trip to the shop to buy eggs, little did she know by the time she returned home an idea would be hatched for her own ...
SebenzaLIVE
7 months ago
Next Article