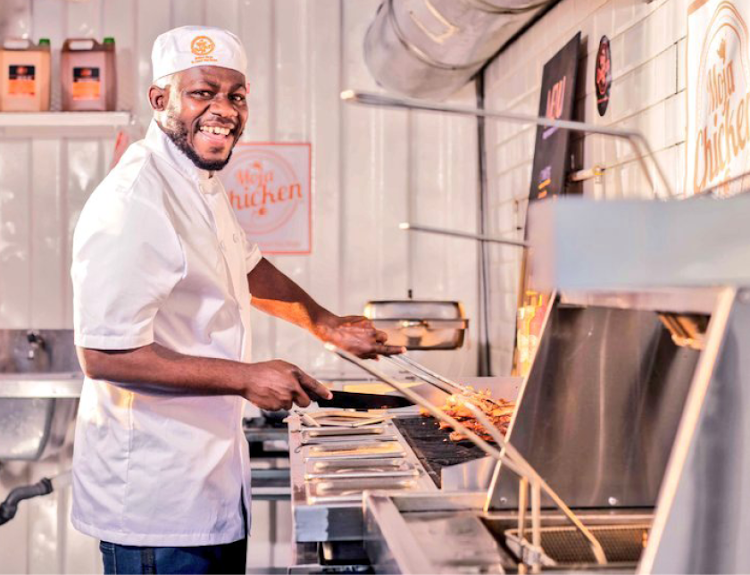 Letlhogonolo Motseeng (34) went from selling grilled chicken feet and gizzards outside shebeens, as a boy, to owning Moja Chicken, with six franchises across the country.

Motseeng, from Taung in North West, says getting it right and winning in business comes from being involved in his grandmother’s small business. She owned chickens and it was Motseeng’s responsibility to feed them.

“I started selling from the age of 11, forced by the circumstances at home.

"I was trying to help my grandmother. I sold sweets and, as I grew older, I sold t-shirts, had a food stall and public phone container and did events. I have always been selling,” he says.

He wanted to learn skills that he could use effectively in future.

He worked in marketing, sales and consulting. While at his day job, he also had ‘side hustles’ and, in 2018, came up with the idea of Moja Chicken.

“I saved money and in 2019 decided to quit my job of seven years. I used my savings and provident fund to start the business,” he says.

Motseeng opened the first Moja Chicken outlet in September that year. Apart from his childhood experience with chickens, he studied the market and understood what consumers wanted.

“South Africa is one of the biggest chicken consumers in the world. Chicken is the most affordable meat here, so I understood that the market was big enough.

"I took chicken dust – township-style – and gave it flavours. This is what I sell at Moja Chicken,” he explains.

Motseeng says the first phase was to establish the franchise in townships. Now he wants to open Moja Chicken in suburbs and at taxi ranks.

“I strongly believe in the township economy. The name Moja means awesome, delicious, lekker. It is one of the biggest township lingos across South Africa,” he says.

Motseeng, who is driven by job creation and empowerment, has already employed 40 people. This, he says, warms his heart.

“Among the staff are five people from historically disadvantaged backgrounds. I have made them permanent employees and aim to grow this number in the near future.”

Motseeng was selected by the National Youth Development Agency as one of its trailblazers for 2021, which recognises and celebrates youth who make a difference in their communities.

“It came as a shock and the award is something big for my career. I continue to inspire many young entrepreneurs out there because I believe in making a difference in society,” he says.

How to start a franchise?

“If you are in the food industry, you definitely have to be registered with the Franchise Association of South Africa and the Restaurant Association of South Africa,” says Motseeng.Like any other business, it is best to involve attorneys. “Get a proper legal franchise agreement. You can get an attorney who works in that industry to take you through the paperwork and ensure everything is above board,” he says.

As a franchise, you will need to own the products. Motseeng also owns the sauces and spices that are used in Moja Chicken outlets. He also advises marketing the business well, using various platforms to reach the targeted market.

Frank Molongwana, 25, took a leap of faith when he quit his job at a big courier company to launch his own business, Frank Couriers.
SebenzaLIVE
2 months ago

Kwadi (29), from Brits, in North West, is a livestock farmer and recently ventured into vegetable farming and horticulture.
SebenzaLIVE
2 months ago

Attempting to forge an entry into the SA’s forestry industry was no easy task for Treasure Thabethe.
SebenzaLIVE
2 months ago
Next Article