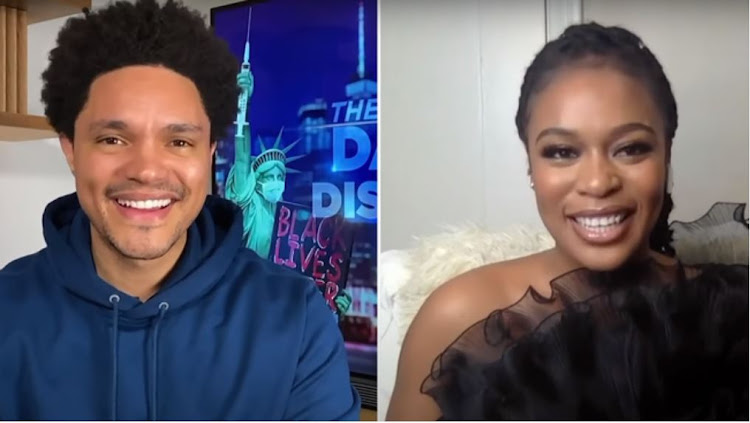 The now US-based actress had a virtual interview with the South African comedian on her breakout Hollywood role in the highly acclaimed film, Coming 2 America.

Like a page from an African inspired fairytale book, the KwaMashu-born actress reflected on pursuing her American dream despite comments from naysayers and how it felt to finally make a mark in the Hollywood scene.

Mbatha has also been dubbed a "breakout star" by various publications such as Vulture, Harper's Bazaar and The Hollywood Reporter.

Here are our favourite moments from the interview of two South African stars who appeared happy to see each other:

Landing the role of Mirembe

Having not been in the US at the time, Mbatha narrated her elaborate journey just to audition for the film.

“I literally flew from New York to Switzerland to the United Arab Emirates (UAE). By the time I’m in the UAE I’m supposed to fly back to SA because I’m supposed to go and host the South African Music Awards.

Her own coming to America story

"First of all, you're coming into America with a tourist visa and then you move from being a tourist to somebody who's being employed in America.

"So, it's a whole process... I remember even when I got the call to make it back to the State, I was told I needed to sign papers so that we can give you your official visa and go back to the Embassy in SA to hand that visa tucked in your passport and then come back to the US. Let me tell you, I genuinely said to myself that I really deserve this movie. I worked really hard for it."

"Honestly, it's been an out-of-body experience for the longest time, but I think you [Trevor] would be able to let me know how to go about this Hollywood thing.

"Because having to call Eddie Murphy, ’Eddie’, when Eddie came on to set or Arsenio or Wesley...it’s been an amazing journey like a full-circle moment for me.”

Mbatha concluded the interview with her hopes to continue with her philanthropic ventures and future acting and producing projects.

Nomzamo Mbatha is the first black woman from Africa to launch a collection with leading sports brand, Puma.
S Mag
1 year ago

Nomzamo Mbatha is dazzling with that African butter!
S Mag
1 year ago

Coming 2 America fails to revive the enchanting Afrocentric charm and charisma that a young Eddie Murphy oozed in the original film more than 30 ...
Entertainment
1 year ago

This is Nomzamo Mbatha’s Hollywood debutante ball and I have cracked an exclusive invite.
Entertainment
1 year ago

The actress and keeps shining as one of Mzansi's best exports.
S Mag
1 year ago
Next Article