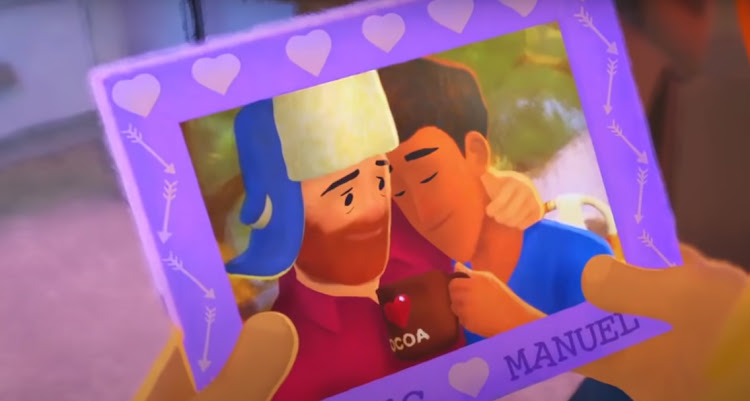 A screenshot from the new animated short 'Out' shows the lead character Greg (left) and his boyfriend Manuel.
Image: What's On Disney Plus/YouTube

What do Pixar’s newest animated short and a 17-year-old boy introducing his parents to his boyfriend for the first time have in common? They’re both coming Out.

Pixar — the studio that brought you Onward, Toy Story, Finding Nemo and many others — recently debuted their first film featuring an openly gay lead character on the streaming service Disney+.

The movie, called Out, revolves around a young fella by the name of Greg and the pickle he finds himself in when he moves in with his boyfriend.

In his real life, Greg is out of the closet and happy. He owns a dog, has a boyfriend and generally goes on about his business without bothering anyone. The problems start when his parents unexpectedly show up to help him move.

WATCH | The teaser trailer for 'Out'

As it turns out, Greg hasn’t come out to his parents just yet — and the pictures strewn around the house of him and his firefighting love are something of a dead giveaway.

In a fit of panic, Greg wishes himself out of the conundrum. Misadventures soon follow.

Sections of Twitter were chuffed with the movie, heaping laurels on Pixar and Disney for the positive step they've taken towards better LGBTQIA+ representation:

I’ve had a tense relationship with @Disney & @Pixar in the past, especially regarding representation, but I have to say their new short #Out on @disneyplus feels like a real step in the right direction. Thank you and please keep moving forward. 🏳️‍🌈💖 pic.twitter.com/PgoF24FYVX

Disney Plus really just gave us the best gay ship of 2020 in under 10 minutes. #Pixar #Out pic.twitter.com/SFXOVyPaYf

You all better go watch the beautiful new Pixar short "Out"; it's the first openly LGBTQ+ short and it's about a gay man coming out to his family 🏳️‍🌈

• Disney+ is currently unavailable in SA.