WATCH | 'Those men are my supporters': Zodwa Wabantu on groping video 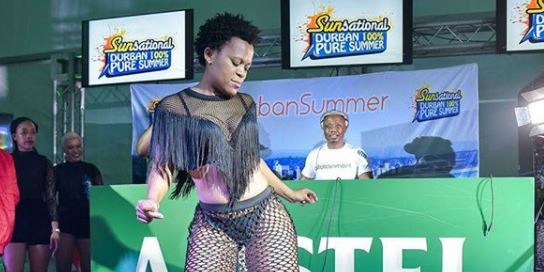 Zodwa Wabantu's fans are fuming after a video of her being "touched inappropriately" by male fans went viral.

The video, seemingly shared by a fan, shows Zodwa speaking to party-goers while on stage. Dressed in a thong-like dress, close to four men can be seen trying to grab her booty.

Although Zodwa didn't seem bothered by being touched by the men, some fans are spitting fire and have labelled the act "disrespectful".

Speaking to TshisaLIVE, Zodwa explained that she was not bothered by being touched by the men, as they were her supporters, who came to see her perform. "They are my fans, there was no abuse whatsoever, and no harm was done."

She added that the people who were commenting on the issue were not at her show and were not supportive of her career. "Those men are the ones who support me, not all these people making noise. I am theirs."

Zodwa said she would continue to allow people to touch her while she was on stage.

This is what people had to say on social media:

Zodwa Wabantu ? What is wrong with these men? #ZodwaWabantu pic.twitter.com/4rKnzEGMWR

This Zodwa thing is actually really painful , how do you get to a point as a woman you are comfortable with strange men touching you like that , when you can’t even see their faces ... in cringing right now

And that makes it right, ushidi phela lo. Zodwa should be respected nje!!!

Men know the boundary very well. The problem is when they think Zodwa's "business" is an invite to touch her, they have not mastered that it's for eyes only not hands.

But coming to think of this, a lot of women are going through this... #Zodwa pic.twitter.com/eQVBBuuLoX

However, not everyone was bothered by the video, as they felt the same thing had happened to Cassper Nyovest.

The same thing gals did to Cassper Nyovest is the same thing nikkas did to Zodwa Wabantu......
But the energy is different now ...
Anyway s'thule nje, siyabuka ? pic.twitter.com/8zzSiAK4Az

Ya'll are actually judgemental and like projecting your views on how other people should live their lives until its done to you. pic.twitter.com/JvAVGUr6IH

People catching feelings about Zodwa being touched on stage.

So because Casper got touched, it’s okay for it to happen to Zodwa? Wow pic.twitter.com/pYZbbYPe6N

The difference is Cassper allowed them to do so and he's an artist, Zodwa also allowed them but that's how she got paid. So this has actually nothing to do with us they loved it pic.twitter.com/kaSrhIfH1u