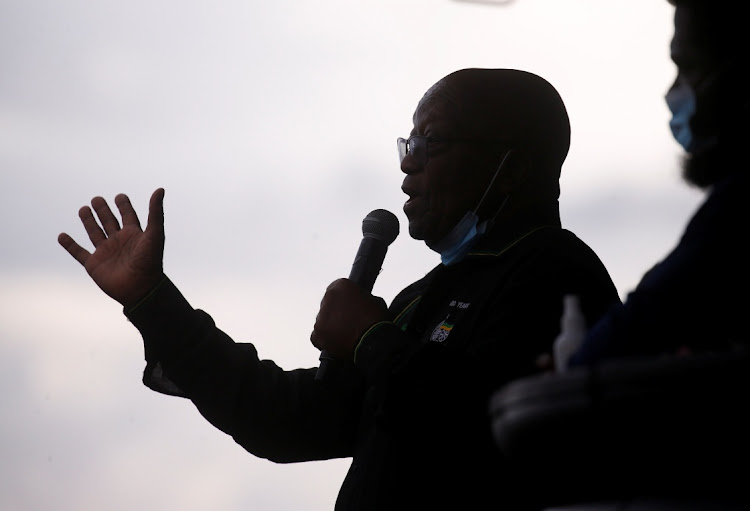 Former president Jacob Zuma speaks to supporters who gathered at his home in Nkandla on July 4 2021.
Image: Rogan Ward

The manner in which the police responded to the situation at Nkandla is commendable. There were concerns from the media and political analysts about the visibility of police as crowds of Jacob Zuma supporters gathered at his home.

At most of gatherings breaking lockdown regulations, regardless of whether such are a service delivery protest or church event, police are blamed when they use force to intervene.

Contrary to the narrative about the absence or inaction of police at Nkandla, police members were there albeit in civilian clothing. It is unfortunate that their operational tasks cannot be shared with the media, lest it jeopardises their plan.

To disperse such masses would have invited resistance and retaliation, and had the police responded we, the public, would have blamed and accused them of brutality or another Marikana.

It is common course that we South Africans do not adhere to the rule of law, especially when coming to protests and gatherings. What we saw at Nkandla does not differ with EFF protest a few weeks ago. I think we need to talk to our own behaviour and make a noise of obeying the rules and regulations of legal protests in general terms.

The main concern today was going to be how many people lost their lives and the police being blamed.

It is because of their strategy that no one lost their life at Nkandla.

We saw some individuals firing guns in the air and that shows how dangerous the situation would have turned. SA Police Service clearly implemented some of the Farlam Commission's recommendations following the Marikana massacre.

Let us commend the police because no life was lost and no one was injured or hospitalised.

Police did not retreat from the crowds in Nkandla, KwaZulu-Natal, because they were scared. They did so to avoid loss of life, police minister Bheki ...
News
1 year ago

The streets of Nkandla were a hive of activity with former president Jacob Zuma’s supporters who came out in numbers yesterday – the last day on ...
News
1 year ago

Cops spot on on Nkandla retreat

There are few things that get South Africans hot under the collar like our experiences or perceptions of how police deal with those who break the law.
Opinion
1 year ago
Next Article