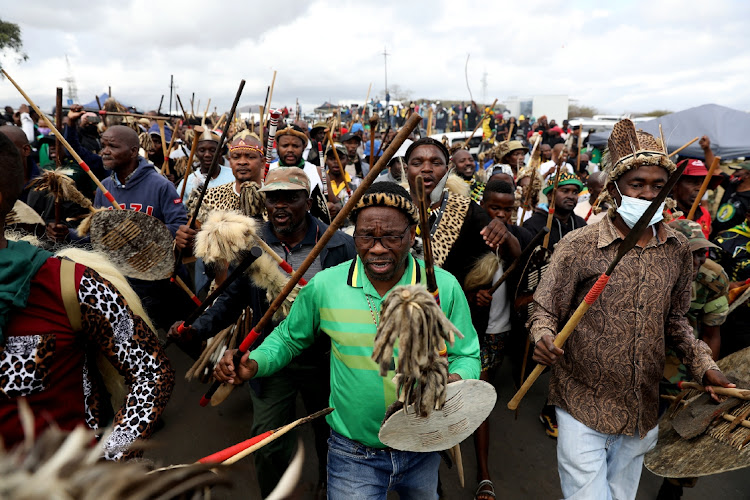 Police did not retreat from the crowds in Nkandla, KwaZulu-Natal, because they were scared. They did so to avoid loss of life, police minister Bheki Cele said.

Cele was answering questions from journalists during a police vaccination drive in Orlando East, Soweto, on Monday morning.

At the weekend hundreds of supporters of former president Jacob Zuma flocked to Nkandla, many without masks and no social distancing in clear violation of the country’s level 4 lockdown regulations.

While a continent of armed police were in Nkandla on Sunday, they were criticised for not enforcing regulations by  arresting those who were in violation.

Cele said the main law of SA was the constitution.

“The job of the police is to enforce the law. But in the same sentence, it is to protect the inhabitants of the country. So it wouldn’t have been proper, in fact it would have been reckless (to act against the crowds at that time).”

He said police had information that were at least a hundred people that had guns in the crowd who wanted to shoot at the police.

"Once the police are shot at they must reply and bullets have no eyes to say this is a child, this is a woman,” Cele said.

"To say that police haven’t done anything (is incorrect)."

He said police had 20 cameras there and were working with TV channels to get footage of all those who broke regulations.

"We have extra detectives who are working on that. We will be picking our people. That we did not pick them on that day does not mean we are not going to."

South Africans must continue to obey the law.

“If you break the law you will be arrested. Either at the spot where you are breaking the law or at a later stage but you will be arrested. We are not encouraging and don’t want to encourage South Africans to break to law because there will be consequences. It might be late or immediate but it will happen,” Cele said.

Police there did not retreat because they were scared.

“We had a big big continent of police. Around there there were about 200 police, including special forces and all that.”

"Special forces when they get there and somebody who is reckless, who has no responsibility whatsoever who wants to cause chaos, we are not going to be sucked in the chaos the people that, when lives are lost, they have no responsibility to explain. So we had to really take our lessons. We have a reference point in SA. We have Marikana and we don’t want to go back there.”

As the third wave of infections hits Gauteng hard, the provincial government has announced that a Covid-19 mobile vaccine drive will be launched this ...
News
2 months ago

Police minister Bheki Cele's office said in a statement that the plan was to vaccinate more than 180,000 officers.
News
2 months ago
Next Article