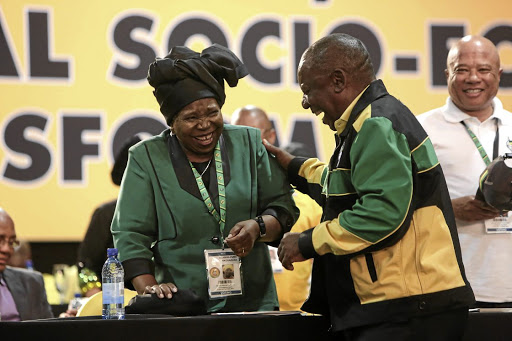 Nkosazana Dlamini-Zuma and Cyril Ramaphosa at the ANC national conference in Nasrec, Johannesburg, where both contested the race for the presidency of the party.
Image: Alaister Russell

Radical Economic Transformation (RET) proponents and apologists have been frothing in their mouths about the funding of the CR17 campaign. Although there were other candidates fighting to become ANC president, only President Cyril Ramaphosa was singled out for special attention.

An insider of the Nkosazana Dlamini-Zuma campaign has now made allegations of a R5bn "NDZ Project". The narrative is that 10 people, including Jimmy Manyi, Phapano Phasha, Bathabile Dlamini, Nomvula Mokonyane, Maite Nkoana-Mashabane, Supra Mahumapelo, Carl Niehaus and Hlaudi Motsoeneng and other junior comrades attended the NDZ Project meetings in 2011.

The insider alleges there were six pointers to the NDZ Project. The most important was first to lobby African states to secure the African Union Commission chair for Dlamini-Zuma. This was solely meant to boost her political CV. Funding for lobbying was made by the Guptas. These guys already had billions looted from state coffers. African diplomats were allegedly handsomely rewarded for their troubles.

After failing to rattle Ramaphosa, the insider claims a final solution was hatched at Maharani Hotel to remove him. This meeting was attended by Zuma himself, Mahumapelo and Ace Magashule and youth formations..

When everything else failed, a coalition with the EFF was suggested but the EFF was still strong then and it needed no assistance to deal with Ramaphosa. The EFF is now becoming weak hence the tea party that took place at Nkandla. The EFF was also shocked by its poor performances in by-elections, no wonder it wants postponement of the local government elections to reflect and regroup.

Even if the high court granted the EFF the court order they want to unseal the CR17 bank records, they would still be protected from public ...
News
10 months ago

'Zuma is not a saint. He was a disaster for this country,' said transport minister Fikile Mbalula.
News
10 months ago

The ANC's integrity commission has criticised President Cyril Ramaphosa for seemingly giving it the runaround for 18 months instead of answering ...
News
1 year ago
Next Article