RIP Andrew Mlangeni, now we're left at the mercy of the thieving 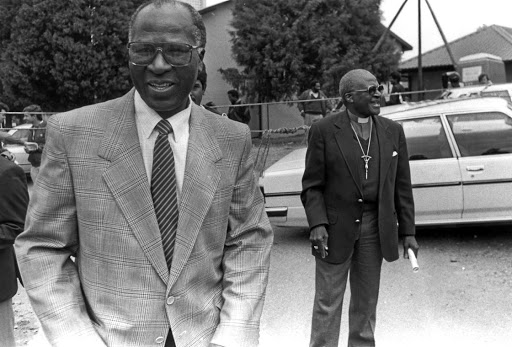 The late Struggle stalwart Andrew Mlangeni a few days after his release from prison in October 1989. Seen in the background is Archbishop Desmond Tutu.
Image: Joe Sefale / Sunday Times

The whole world knows that Andrew Mlangeni is no more. His death was even announced on CNN by people who cannot pronounce his surname. Such was the global weight of his life.

We say "May his/her soul rest in peace" to the dead for two reasons. The first reason derives from unanimity among most religious beliefs that repose is the manifestation of perfection, nay completion.

That which is in a state of flux is necessarily incomplete. We can observe a perfect being only when motion has ceased. Before that, everything is transience.

We are overwhelmed by a dead body because of what the departed person has left behind and what we know will no longer happen now that the person is no more.

The invocation of "rest" and "peace" in relation to the dead expresses our sigh of relief that he who has departed, in the universe of eternity he has now entered, will no longer experience the suffering that goes with life on earth.

That is an expression of our closest approach to the idea of happiness, nay bliss that we know has never been, and will never be, experienced on earth.

ANC veterans have slammed the move by the party to have former president Jacob Zuma headline a programme to pay tribute to the last surviving Rivonia ...
News
1 year ago

Sometimes we cry not because we think a 95-year-old should not have died, but because we are overwhelmed by what his death enables us to see in our sorrowful silence: a spiritual universe where existence is not governed by the laws of physics.

We cry because we cannot understand. Our tears are a sign of utter helplessness, an absolute surrender to a spiritual force about whose workings we have no idea.

Secondly, we say "may" when we wish the dead peace due, specifically, to Christian teachings. We are told in the Bible that, after death, the soul faces to possible destinies: heaven or hell.

To say "may" is therefore to supplicate God to show mercy by opening the gates of heaven so that our beloved ones can enter and "rest in peace".

Nelson Mandela did not believe in such spiritual formalities. He said when he gets to heaven, he would look for the nearest branch of the ANC. Mandela did not say he would ask God to forgive his sins.

This brings us to Andrew Mlangeni. How are we to judge him? Or, must we heed Christian theology and desist from judging?

To be sure, Christianity does distinguish between earthly and heavenly matters. The injunction not to judge relates to the divine, not to matters terrestrial.

Thus we can leave Mlangeni to face his God, to explain how he reconciles his earthly conduct with the ten commandments and the teachings of Christ.

Ours is a wholly different calling. We are to remember Mlangeni as what the Polish philosopher Leszek Kotakowski calls "homo historicus", historic man.

But Kotakowski says we must not fear to judge: "The meaning of the past can be grasped only from the vantage point of the expected ultimate fulfilment".

Struggle stalwart Andrew Mlangeni spent the last few hours with his son Sello, but they could not communicate.
News
1 year ago

As we all visualise Mlangeni's perfect (motionless) body, we are called upon solemnly to identify what his conscious involvement in earthly struggles, ultimately, sought to fulfil.

At least there is one thing on which both fools and sages agree: that Mlangeni has lived long enough to see the fulfilment of his dream - democracy.

In his first public reaction to Mlangeni's death, President Cyril Ramaphosa said it marks the end of a generation. Such was a generation of human saints.

What Mlangeni leaves behind is a generation of crooks, thieves who line their pockets with money from the Guptas or Bosasa.

This is precisely the point where we must all wipe our tears, and let Andrew Mlangeni rest in peace, as we walk back to be swindled by the crooks he left behind.