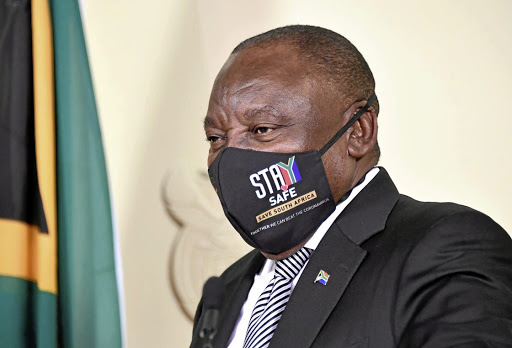 President Cyril Ramaphosa and his administration's handling of this pandemic will be one other example of how the ANC-led government was just beyond its depth and, frankly, hopeless. /GCIS / BABA JIYANE

Defeated. Despite months of a hard lockdown the government has once again failed to get its act together.

We are heading for the peak of the Covid-19 pandemic and all indications on the ground are that we are not adequately prepared. The health system is already creaking under the pressure of increasing caseloads.

It is easy for President Cyril Ramaphosa to focus on what citizens are failing to do to secure their own health. It may seem impressive to chastise "fellow South Africans" for being inconsiderate and reckless in their conduct.

As he points the finger at society, the other fingers are pointing right back at his government's failures. Its handling of this pandemic will be one other example of how the ANC-led government was just beyond its depth and, frankly, hopeless.

Since announcing an easing of restrictions from alert level 5 of the lockdown, the incompetence of the sixth administration has been demonstrated in the incoherence and contradictions in regulations aimed at curbing the spread of the virus.

The Covid-19 pandemic set the stage for the ANC-led government to exhibit its potential to produce and execute a realistic plan to navigate society out of a clearly defined crisis and to mitigate apparent risks. It was one more opportunity to convince us why it deserves to be the leader of society - as the party's own documents declare of the organisation. Would it rise above the politics and be courageous to take actions to safeguard the wellbeing of the nation?

Beyond shutting down the entire country, counting on the goodwill of communities, workers and industries to cooperate, buy into the vision and make difficult sacrifices, the government has once again showed its inability to take a position and follow through to the end.

In August, finance minister Tito Mboweni's growth plan will be a year old. It identified the most important reforms needed to galvanise growth.
Opinion
1 year ago

Like many things in the governance of a country, this national disaster requires a comprehensive strategy not a piecemeal approach that compartmentalises society and fails to see that decisions about one issue have ramifications for other areas of life.

If the goal of the initial lockdown was to keep infections down, then the question at every stage should have been how the opening up - including economic relief, social support and grants, education and support for sectors severely impacted - would contribute to achieving that.

If you are convinced that banning cigarettes and alcohol , keeping restaurants, entertainment venues, grooming facilities and churches closed and limiting the loading of taxis as well as workers at workplaces, all help, then make the decision and stick to it. Don't flip flop.

The path taken thus far has resembled more of a social experiment than a well thought-out strategy.

The economic relief package, though bold, is insufficient because the state ran out of money before the pandemic. The universal income grant has been riddled with problems and many didn't get paid. Funding for social support as well as state provided food parcels have invited more looting and corruption.

This should come as no surprise. This is a governing party that is still grappling with loadshedding 13 years after the problem was identified and with what to do with SOEs that have drained the fiscus. It is the same ANC that has presided over the collapse of local government. It is the same ANC that stood by while its members and leaders sold off the state for selfish gain.

Ramaphosa and his administration are the product of this same ANC. The belief that he is somehow exceptional and can produce a miracle to make up for the deficiencies of his party is terribly misguided. The ANC is as much the sum of its members as it is a system that shapes them.

And so, we have to accept that the president is right, getting through this virus storm will depend on what we do to protect ourselves.

Talk raised by the announcement of preparation of a million graves is nothing but a ruse to distract the nation.
Opinion
1 year ago

The ANC is in discussions with the private pensions industry and National Treasury on how best to change the law to allow pension funds to invest ...
Business
1 year ago

The family of the late ANC KwaZulu-Natal spokesperson and former KwaDukuza mayor, Ricardo Methembu, have refuted claims that he had attended a ...
News
1 year ago
Next Article