Alcohol ban not the only reason for reduction in crime 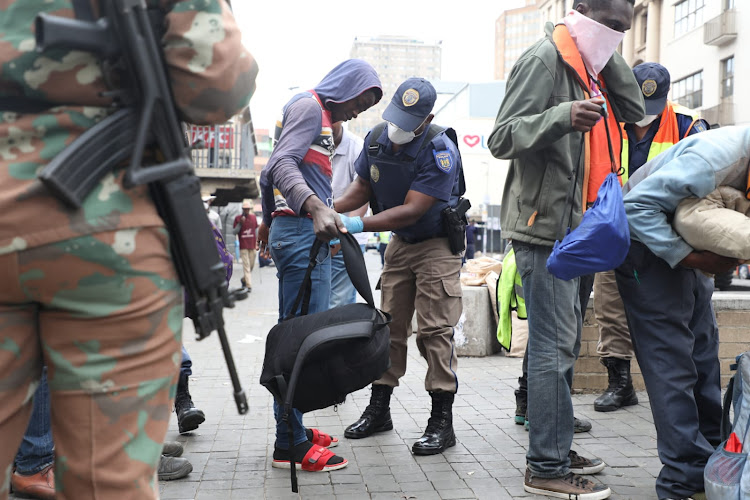 SAPS and the SANDF round up homeless people in the Johannesburg CBD to take them to places of safety amid the Covid-19 outbreak. The writer says police minister Bheki Cele doesn't seem to believe high visibility and better coordination of law enforment agancies might have been a major factor in the reduction of crime.
Image: Thulani Mbele/Sowetan

It is difficult to understand why police minister Bheki Cele has opted to attribute all of the highly welcomed progress in reducing crime during the Covid-19 lockdown to only one variable - the prohibition of the formal sale of alcohol.

Yes, maybe he is correct in his assessment. But what does this mean to the confidence we should have in our law enforcement?

At no point in post-apartheid history have we had such a large number of law enforcers on our streets. These include the SAPS, municipal police in some cases topped up by thousands of soldiers from the defence force.

It is a huge, costly operation. The SANDF alone has declared a budget of R4,59bn. SAPS has not published budgetary implications. However, the 50,000 odd on-the-field officers comes at some cost in terms of overtime pay, logistics and other staff/non-staff related costs.

With a sharply declining state revenue and strong competition for budget allocation among government departments, one would have expected the SAPS leadership to demonstrate to the public (and to National Treasury) how effective the police force can be when allocated additional resources.

You would have expected an argument that we can have a long-term positive impact in dealing with the crime endemic in society. Even the response that there are no officers and/or cars to attend to 10111 calls will probably decline.

No, Cele doesn't seem to believe high visibility and better coordination might have been a major factor in the reduction of crime.

Maybe we need to take a step back to year 2010, when SA hosted the Soccer World Cup.

In the build-up to the tournament, there were a series of global reports about how dangerous our country was and that international soccer lovers were going to fall victim of crime as soon as they landed in our country.

As history will have it, that did not materialise largely because our law enforcement agencies stepped up to the challenge. At the end of the tournament, UK newspaper, The Guardian, wrote: "Sceptics predicted the World Cup would be a boom time for criminals in South Africa. In fact, the football appears to have led to a dramatic fall in violent offences.

Police on Wednesday warned people who bought alcohol brewed at a home in Dududu, KwaZulu-Natal, to not drink the booze, saying it could have deadly ...
News
2 years ago

"Only 100 people have been found guilty of offences related to the tournament in special courts, where staff have spent many hours idle. There have been no murders or stabbings despite international fears about the event."

The tournament itself was sponsored by an international beer, Budweiser, which was promoted and consumed in every stadium. Screening parks, bars and taverns were full of patrons, enjoying the beautiful game in the company of their favorite drinks of choice.

The lockdown environment is the direct opposite of the World Cup where everyone went out to celebrate, and police had to handle large crowds, traffic to national stadiums and thousands of international visitors. This time, we are all required by law to stay at home and the majority have made an effort to comply.

The logical question is, if most people were staying at home, who is out there in public to fight with who?

If traffic is so curtailed, there would be fewer options for car hijackings, not to mention the high probability of an arrest from all the roadblocks and patrols.

A more objective review of all the lockdown variables - no formal alcohol sales; stay-at-home rules; and law enforcement - is needed if we are to learn anything from the reduction in crime, road crashes and other injuries that end up in hospital casualty departments.

*Mngadi is the spokesperson of the South African Liquor Brandowners Association

Police minister Bheki Cele has hinted at a looming lockdown downgrade for the country from level 4 to level 3.
News
2 years ago

There have been 174 burglaries at bottle stores, taverns, shebeens and alcohol warehouses across the country since the beginning of the lockdown on ...
News
2 years ago

Criminals in some of the most violent cities in the United States have been driven to ground by Covid-19, according to a report.
News
2 years ago
Next Article