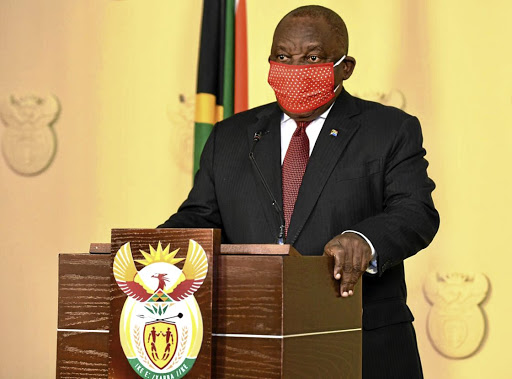 Most parts of SA may be downgraded to Covid-19 alert level 3 next month as the government moves towards easing national lockdown restrictions and gradually opening the economy.

However, certain parts of the country which continue to record a high number of infections would remain on Covid-19 alert level 4.

This was announced by President Cyril Ramaphosa when he addressed the nation from the Union Buildings last night.

Ramaphosa said there would be consultations taking place before the adjustments were made, but warned that the abrupt lifting of the lockdown risked a rapid and unmanageable surge in infections.

"For now, infections are mostly concentrated in a few metropolitan municipalities and districts in our country. It is important that we maintain stringent restrictions in those areas and restrict travel out of these areas to other parts of country with lower rates of infections," Ramaphosa said.

The announcement came as the Western Cape has recently overtaken Gauteng with the most number of recorded coronavirus infections.

"Those parts of the country with the highest rates of infection remain on level 4. We will make further announcements in this regard after the completion of the consultations we will have," Ramaphosa said.

"In the coming days, we will also be announcing certain changes to level 4 regulations to expand permitted business activities in a number of sectors in the retail, [and] the e-commerce..."

The president said the process of consultations would begin immediately.

"We will immediately begin a process of consultation with relevant stakeholders on the proposal that by the end of May most of the country should be placed on alert level 3," he said.

Ramaphosa said the approach was a cautious one which was guided by "best available evidence".

South Africa could move to level 3 lockdown by June

President Cyril Ramaphosa said areas with widespread and uncontrolled infections of the coronavirus would likely remain on level 4.
News
1 year ago

"We will therefore continue to proceed cautiously, informed by the best available evidence and guided by the advice of local and international experts.

"But also in observing the experiences of other nations," Ramaphosa said.

"Our goal is to steadily increase economic activity while putting measures in place to reduce the transmission of the virus and provide adequate care for those who become infected and need treatment."

Ramaphosa said the rate of infection in an area and the state of readiness and the capacity of its health facilities to cope with treating infected people will determine the level in which that particular area would be placed.

Ramaphosa also announced that the death toll from Covid-19 now stood at 219 as the number of confirmed cases surpassed 12,000. Over 9 million people have been screened and 370,000 tested. Ramaphosa, however, praised the country's recovery rate with almost 5,000 recoveries recorded.

The president said going forward there would be an urgent need to "re-organise workplaces, schools, universities, colleges and other public places to limit transmission".

"The transition to the next phase of the coronavirus response will in many ways be more difficult than the present one," he said.

Regulations governing the sale of alcohol during the lockdown, including limited trading hours, will endanger lives, says the South African Liquor ...
News
1 year ago

Police minister Bheki Cele has hinted at a looming lockdown downgrade for the country from level 4 to level 3.
News
1 year ago

The national command council on Covid-19 was meeting on Wednesday, where it could make the anticipated announcement about relaxing the country's ...
News
1 year ago
Next Article