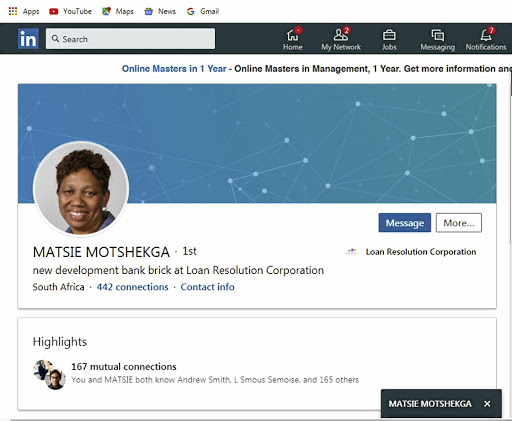 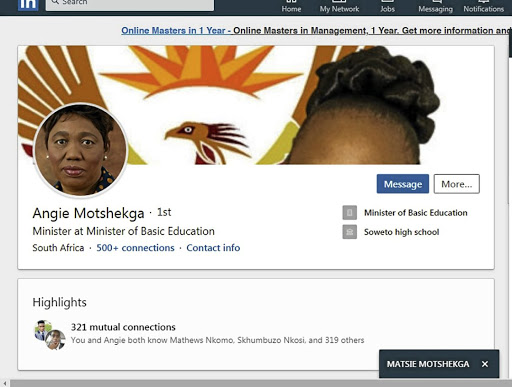 The so-called "419" scammers will always find a way of depriving Sowetan readers of their money.

If they are not selling dogs which never arrive to the buyers after paying the purchase price, they are scamming those who are searching for love on the internet or in need of funding.

Common to this scam is that the fraudsters get the victim to send money upfront by promising them huge amounts of money they would receive later if they co-operate.

Since 2017 until December last year, Kenneth Makitla, 32, of Mamelodi in Tshwane has lost R32,000 which he paid in advance to what he believed was a China Development Bank.

Makitla was looking for funding when he responded to a Linkedin account which he believed was a legitimate account of education minister Angie Motshekga.

Little did he know that it belonged to hoodlums who were praying for desperate people like him, he said.

Makitla, who is involved in development projects, said he needed to do food gardening project around schools, particularly in Dennilton in Sekhukhune, Limpopo.

He said the person pretending to be Motshekga asked him to provide his proposal for their consideration and it was in turn forwarded to China Development Bank.

The unscrupulous individuals who scammed Makitla were organised in that they also responded to him with a letter bearing China Development Bank's logo.

Believing he had won a bonanza cash prize from Rica International Incorporated‚ in the United Kingdom‚ a Limpopo man was allegedly duped into paying ...
News
2 years ago

On closer look, Consumer Line noticed that it did not have the physical address, the directors' names or the telephone numbers of this bank which responded to Makitla.

Nonetheless, he was told he had been approved for the 2017/2019 international funding to a tune of R12,6m. That marked the beginning of his misery, he said.

This letter was followed by another one, telling him that the bank had opened a bank account on his behalf with the details he provided, but needed to pay R3,710 to ship his bank card which he duly paid.

But before it could be delivered, he received a further email with an attachment from "Inland Revenue Department" in Hong Kong, telling him that they needed to transfer his R12.6m, but it had been stopped since he did not provide a tax clearance certificate and proof of residence, Makitla said.

He quickly obtained his tax clearance and sent it to them, but this was not the end of his misery, he said.

Each time they demanded money there would be a new reference number and directed to deposit to different banks and different people, Consumer Line noted.

"I deposited money to Sipho Ngozo, Suzan Kunene and Nomphelo Mtshelo and sent proof of payment as required, but never thought I was a victim of 419 scam," he said.

He recalls being ridiculed after he paid R2,500 out the R5,800 courier fee because he had no money when the demand came, he said.

The email sent to him thereafter read: "I was so shocked to see this payment, you are supposed to pay R5,800, not half of it. I advise you to try and arrange R2,500 before the end of tomorrow to get your funding."

Subsequent to paying all the money, they demanded he then write to Motshekga, complaining about non-delivery of his ATM card and funding, he said.

The response from the pseudo Motshekga said nothing about his complaint except the projects she was allegedly busy with, Makitla said.

The hopeful Makitla said in December he offered to go collect his card from their branch, only to be told that there was no need to go to their branch as their agent would deliver it.

Motshekga's spokesperson Thobeka Magcai undertook to respond before going to print but has not commented to these allegations by the time of publication.

Marriages of convenience, which are mostly used by foreigners to gain SA citizenship will become a "dangerous game" to play in future, warns home ...
News
1 year ago

Verify before you send cash to your WhatsApp contact

Social media platforms, such as WhatsApp, have become a breeding ground for scams, with fraudsters taking over people’s accounts to solicit money ...
Business
1 year ago
Next Article