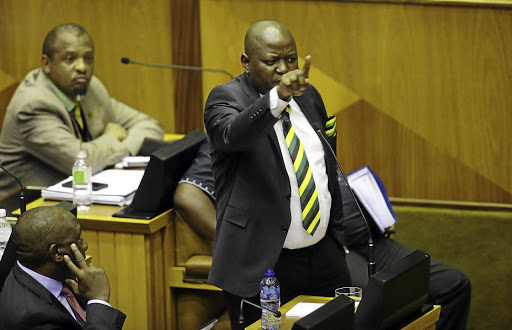 The country is well within its rights to be bewildered at these events because parliament is the last place where one expects to witness a genuine crisis such as GBV being made into a mockery and a petty tit-for-tat.

"To whom much is given, much is required." Our political representatives in parliament are held in high regard, the positions they hold is nothing to be taken lightly, we therefore cannot let them get away with using such a serious matter in such a callous way. These are the very people who were part of the president's joint sitting of parliament in September.

A joint sitting meant to deal with violence against women and children, following the tragic killing of Uyinene Mrwetyana and many other women and kids.

You would think with their positions, proximity and exposure to knowledge, they would at least not be tone deaf, but they have proved otherwise.

Mamabolo is said to have raised the allegations of abuse because the president called on to MPs to expose GBV. But I am not convinced - I cannot help but think this was brought up because he had something to gain. If indeed this was genuine, why did he not jump at these allegations when they came up in November 2019, as he states.

I read the apology penned by Malema. The letter did not move me, instead, it reminded me that this is not Malema's first stint with callous undermining of the injustices women face in our country.

In 2009, while addressing 150 Cape Peninsula University of Technology students, Malema - the ANCYL president at the time, suggested that the woman who accused then ANC president Jacob Zuma of rape had a "nice time" with him and said: "When a woman didn't enjoy it, she leaves early in the morning. Those who had a nice time will wait until the sun comes out, request breakfast and ask for taxi money."

In February 2009, Sonke Gender Justice took Malema to the Equality Court for this statement. In 2010 he was found guilty of hate speech and harassment.

His utterances on rape victims amount to hate speech, according to magistrate Colleen Collis, and they constitute harassment as contemplated in the Equality Act. Malema was ordered to make an unconditional public apology within two weeks and pay an amount of R50,000 to a centre for abused women.

Some may say he was young, naïve and a blind supporter of Zuma. However, these latest events paint a different picture.

Also, this signals how much work we still must do as a country, if esteemed men such as Mamabolo and Malema still grapple with understanding the gravity of violence against women and the sensitivities that should be observed around it, what then about the everyday man? Yes, I expect a lot more from them than I do laymen in our society.

I do not expect a site as important and as symbolic as parliament, a place of robust engagement about our country's direction - a direction that includes the fight against femicide, to degenerate into a spectacle.

I expect those occupying those seats to use parliament as a site to magnify the plight of women - and not for their personal or political gain. The happenings within parliament paint a bleak picture. Women! You really are on your own.

President Ramaphosa the voice of reason

President Ramaphosa showed leadership yesterday when he called for a truce between EFF leader Julius Malema and ANC MP Boy Mamabolo during his ...
Opinion
2 years ago

President Cyril Ramaphosa has apologised to EFF leader Julius Malema for allegations made by ANC MP Boy Mamabolo that he was abusing his wife, Mantoa
News
2 years ago
Next Article