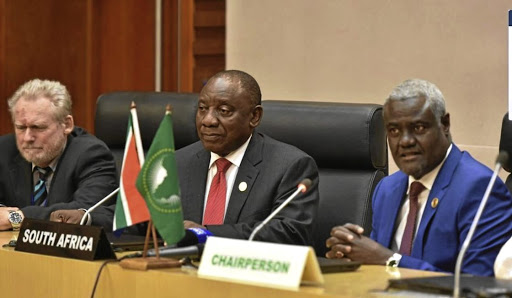 The government of South Africa taking over the chairship of the AU presents the country with a significant opportunity to lead, on behalf of the people of this glorious continent, the writer says.
Image: Twitter

President Cyril Ramaphosa will lead a South African delegation to the 33rd Ordinary Assembly of Heads of State and Government of the African Union (AU), scheduled to take place in Addis Ababa, Ethiopia, on Saturday and Sunday.

During this summit, SA will take over the chairship of the AU from Egypt.

This means that the government of SA will be presented with a significant opportunity to lead on behalf of the people of this glorious continent as he assumes the chairship of the AU for 2020, a year in which the continent has set itself a goal to silence the guns as part of the efforts to realise Agenda 2063.

It is worth noting that SA was unanimously elected to be the chair of the AU in January 2019, by all AU member states at a time when some pessimistic observers were arguing that SA's influence was waning on the continent.

However, it follows natural logic to refer to James Hall in his book Africa's Lost Leader. James Hall observed that "despite challenges the Republic of South Africa has gone through in the recent past, the country is still widely perceived as the natural leader, principal conflict manager and chief international interlocutor on security and economic development".

The continent still has confidence in SA's leadership, and therefore James Hall's assertion was spot-on with resonance to the expression of the first democratically elected President Dr Nelson Mandela who on the eve of democracy enunciated that "the time for South Africa to take its rightful position in the world has arrived".

It was in this context that the democratic government took advantage of its peaceful transition to contribute to the number of democratic initiatives in the South African Development Community (SADC) as an entry point and the entire continent.

It is worth mentioning that in 2002, SA was also the chair of the AU when the organisation was undergoing massive transformations and transition, particularly from the OAU into the AU.

We are now chairing the AU for the second time, and commitment to the consolidation of the African Agenda implies that, without any doubt, our contribution as the chair will be remarkable and visible.

It is vital that as we pause to glance at our foreign policy trajectories in particular towards Africa since 1994, Dr Mandela's words become more guiding compass and relevant that for us to assume any leadership role in the world affairs, it all begins at home through the centralisation of Africa in the implementation of our foreign policy objectives.

Prior to SA taking over the chair of the AU from Egypt, on January 28 2020, President Ramaphosa called SA's heads of diplomatic mission in Africa to Pretoria to once more, highlight the country's foreign policy priorities.

Throughout, President Ramaphosa's emphasis was on the centrality of Africa in the implementation of SA's foreign policy. The principle is that "South Africa's future is inextricably intertwined to that of the African continent.

Our devotion to the issues of peace, security and development and as well as economic and women emancipation finds expression to several initiatives the republic undertook on the continent since attaining democracy.

Mauritius have belatedly followed the lead of South Africa and withdrawn from the on-going Futsal Africa Cup of Nations that is being staged in ...
Sport
2 years ago

The Desmond & Leah Tutu Legacy Foundation has welcomed the re-opening of an inquest into the death of anti-apartheid activist Dr Neil Aggett while in ...
News
2 years ago
Next Article