Why I love it when Bafana do what they do best... lose 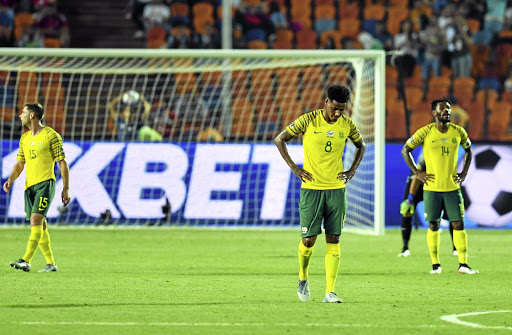 I always love it when Bafana Bafana lose a match, I bask in it.

It's a long standing beef I have harboured since attending a watch party for the 1996 Afcon final.

I got bored of watching the long goalless match and I decided to keep myself busy with gymnastics tricks. I was an extremely supple and theatrical child who often did splits at the end of a haka routine.

Missing the action in the outskirts of the watch party, I decided to try a double backflip on the stair risers. At the very moment I landed my trick, Bafana Bafana had scored their second goal.

My momentous achievement was overshadowed by a bunch of winners on some dry pitch in Soweto.

Bafana Bafana have shown at the 2019 Africa Cup of Nations that they have players‚ too‚ to be hyped up‚ midfielder Dean Furman said after the team's ...
Sport
2 years ago

I was furious. I even called to my mother and in return she waved and yelled "siya vena!" instead of the "outstanding form, tens from across the board!" that I had expected.

This sport thing had not only stolen my thunder, but it took my mother hostage as well. In retaliation, I played a game of hide and seek where I was missing in plain sight and everyone would suddenly realise I had disappeared and needed to be rescued as a potential victim of kidnapping.

There was no such search party, I just sat on someone's red BMW with the world's loudest hunger pangs as Bafana Bafana hoisted their trophy.

Masculinity for a young boy requires you to find a space where you can perform it and eventually conform to a social group that can accept you. Failing to do so often plays out in raised eyebrows that questioned one's sexuality.

Bongani Zungu believes Bafana can compete with best in Africa

At Afcon, SA was an imperfect team
Sport
2 years ago

To quell this quandary, I found a remedy in a place where all rejected black non-conforming people go - whiteness. Caucasians had a much more interesting palate for sports that did not feel doused in heteronormativity compared to SA's holy trinity that is rugby, cricket and soccer.

However, my new-found access to masculinity was absolutely useless when I came to discuss unknown athletes like Dave Mirra of X Games fame or the brilliant mind of Trent Cotchin on a dizzying footy pitch.

Male patriarchs in sports fandom create a culture of norms in which if you fail to conform, you will be at the receiving end of micro-aggressions that can be violently triggering. In dismantling these gender binaries, we can change the snowball effect of the many ways men are often pressured to performative masculinity.

Having been knocked out of the ongoing Africa Cup of Nations (Afcon) in Egypt, the future of Bafana Bafana coach Stuart Baxter looks rather uncertain.
Sport
2 years ago

Finding your place in the world of masculinity, whether you conform or constantly challenge it, can be a harrowing journey. With the erosion of gender constructs, we create spaces where there isn't a tinge of homophobia every time a young man just can't seem to catch anything.

The disdain that many feminine men and women have for sports is not always stemmed from dramatic places like my own, but simply from the constant expectations to conform to the often toxic patriarchal spaces of sports players and their fans.

When there is a thrashing of Bafana Bafana, it is not just a victory for the other team, but it is also a win against the toxic masculinity that often keeps us exiled from the love of the game.

With an ever increasingly genderless world, will there still be a space to cheer for Bafana Bafana or will that eventually erode with the systems behind the moneymaking machine that is football?