A lot has changed for the better since 1994, my dad's home town bears strong evidence 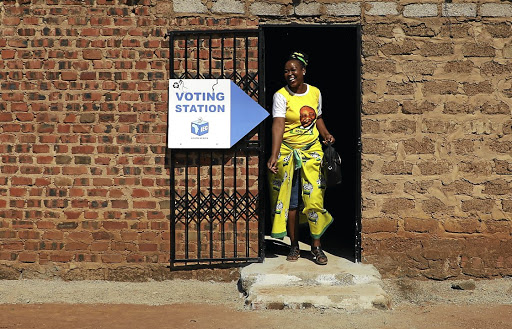 Agnes Skosana cast her vote at Lefatlheng during this week's elections. Sadly, says the writer, corruption is what many people remember about the governing party's past performance. /SANDILE NDLOVU

When the first democratic elections of 1994 came around, I was already a somewhat happy, somewhat anxious citizen of Cape Town.

Though I lived in that beautiful but schizophrenic city, I decided I'd cast my ballot in the township of my origin, Mpumalanga in the Natal midlands.

I had arrived there with my parents as a wide-eyed boy of four, went to local schools, and grew into a feisty teenager who crossed swords with apartheid police and was beaten up and left for dead by Inkatha for his political proclivities.

It was also while I was living in that township that I acquired my first dompas. The dompas, euphemistically called the Reference Book, was a bulky brown tome that every black man had to carry with him at all times.

Failure to produce it to the ubiquitous police would land him in prison, or banishment to a rural settlement he'd never been to. In short, it was while I was living in that township that I first began to understand and feel the pain of being black in SA.

It was therefore logical that, when the democratic elections shimmered on the horizon, pregnant with promises for a better and more humane SA, I had to go to my township to bury the demon of apartheid once and for all. The symbolism was compelling.

WATCH: 'I wouldn’t protest again‚ I lost too much' - Sharpeville massacre survivors speak

Corpses scattered across a police station precinct‚ the brutal beatings of injured survivors and pregnant women running for cover. This is the savage ...
News
5 years ago

I was finally being acknowledged as a legitimate citizen of the country in which my forefathers had been treated as interlopers since the advent of colonialism and apartheid.

It has become fashionable among peace-time revolutionaries to proclaim that over the past 25 years the ANC government has done nothing to improve the lives of South Africans. What a load of poppycock.

Because my father comes from Ixobho, I recall that before the advent of democracy the bulk of residents in that locale had to fetch water from tepid streams and polluted rivers.

There were no roads. Children walked long distances to get to schools which were ill-resourced.

Ixobho is a microcosm of many other such villages spread all over the country, where the quality of life improved drastically after 1994. Even the forever cynical people in urban areas now have easy access to pension pay points; child and disability grants are available.

Sanitation and electricity services have been rolled out at unprecedented levels.

The doors of learning are much wider open for those determined to further their education - even though there are still many challenges in this regard.

And, yes, many black professionals wouldn't be perched on the pedestals they occupy today were it not for interventions such employment equity which happened under ANC rule.

All in all, we have a lot to be thankful for. However, all these heart-warming achievements have been undermined by gross corruption in government.

People who are qualified for some government jobs do not get those positions unless they are in the pocket of some big shot in charge.

Well-connected sycophants get appointed. Ineptitude and incompetence creep in. These have an impact on the pace of service delivery.

Sadly, this is what many South Africans remember about the governing party's past performance. For me, this election was a time we rededicated ourselves to what we signed up for as a democracy in the making.

By the time you read this, the election results would already be out. Whoever wins, are they ready to put the country back on track without undoing some of the good work - and there's a lot of it as I've illustrated - done by the ANC in the past?

Is the ANC ready to self-correct so it becomes the strong force for good it once was?