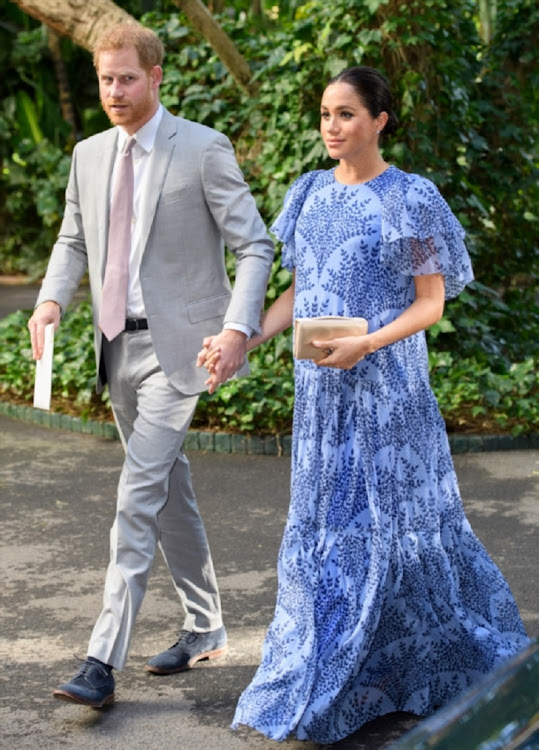 Prince Harry, Duke of Sussex and Meghan, Duchess of Sussex with King Mohammed VI of Morocco, during an audience at his residence on February 25, 2019 in Rabat, Morocco.
Image: Tim Rooke/Pool/Samir Hussein/WireImage

Why is Britain acting like an evil mother-in-law from a classic Nollywood movie?

Poor Meghan Markle has to be the most emotionally abused makoti we have seen in recent times and it doesn't seem like it will end any time soon.

The former actress has been unfortunate enough to have to perform her high-profile makoti duties on the world stage with the majority of the British media and racist conservatives just waiting in glee hoping that she falls on her face.

The British media's criticism of her sounds eerily similar to what a character played by Nigerian actress Patience Ozokwor would say to her children's wives out of spite.

They are never happy, whether it is her clothes, her nail polish, her pregnancy or estranged family's behaviour.

We, unfortunately, also have sad characters in the mix such as Katie Hopkins who comes across as the clichéd evil relative who tries to cause commotion and make ugly comparisons between the two makotis in the royal house: Meghan and Kate Middleton.

This could be an award-winning Nigerian movie in the making.

When I read about Meghan being blamed for Prince Harry's receding hairline I couldn't help but think this sounds familiar.

How many women have been blamed by their husband's mothers or families for any changes in their sons' physical appearance?

"You're not feeding him properly! That's why my bouncing baby boy is losing so much weight! That's why he's losing his hair!"

Has it occurred to you that the Prince may be losing his hair due to the amount of stress your bullying of his pregnant wife is causing him? Or have you not thought that his hair loss could be genetic? With that combination of biology and stress, is it not really a miracle that he still has some of it left?

There is also an obsession over their finances. Even though Meghan's good friend Serena Williams paid for her baby shower, there is still criticism floating around about how excessive it was. Bathong, your son Harry didn't spend a cent on it, please relax.

It's very annoying that the British media acts as if Meghan is not a success in her own right or doesn't have any money of her own. Please don't bore us.

Another ridiculous criticism of the duchess is that she holds her baby bump. Apparently it's because she's showing off her pregnancy and forcing it into our faces.

Even the late Princess Diana didn't have to face so much ridiculousness.

But, let's be honest about the elephant in the room.

The British media and British conservatives are overly critical and hateful of Meghan because she has black blood and has stolen Kate's shine.

Well, dear Britain, it's too bad because Meghan is not going anywhere.

I also believe that Britain has far more important issues to focus on than harassing a new bride and soon-to-be mother. The Brexit crisis perhaps? Just a thought.