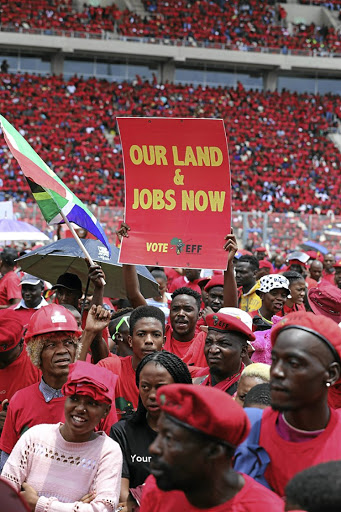 The EFF manifesto describes itself as a new generation and the party is unencumbered by the baggage of a track record in government, says the writer.
Image: SIMPHIWE NKWALI

"Our land and jobs now" is the EFF's clarion call as it marches ahead to contest the 2019 elections.

"Now" is the operative word which gives the young party the edge. The EFF has wisely read the mood of the country which has become impatient for change.

Its 2019 election manifesto contains ambitious proposals that show the EFF to be the epitome of responsive leadership right on the pulse of the kind of change ordinary people want and a collection of over-enthusiastic daydreamers, all at once.

Policy innovations - a phrase used to describe the EFF's policies - include the well-known expropriation of land without compensation as well as proposals like the creation of special economic zones to promote industrialisation, doubling social grants for the poor, eliminating the provincial sphere of government to improve service delivery, and making the National Prosecuting Authority a chapter 9 institution.

These proposals are a response to the EFF's diagnosis of the challenges hamstringing SA's development and transformation.

Chief among these is failed land redistribution and the consistently high levels of joblessness since the ANC took power in 1994.

"It is our considered view that the political changeover in 1994 did not bring true liberation. It was a bluff which continues to subject black people to economic and social apartheid."

This is how EFF leader Julius Malema sums up the conditions in SA today in his foreword.

Manifestos don't win you love of the voters

Do political parties manifestos really matter when it comes to who you vote for?
News
3 years ago

The EFF's detractors label the party and Malema as populist.

In modern use the terms, populist and populism, have been reduced to swear words that are used to insult politicians who for better or for worse - depending on where you sit on the ideological continuum - appeal to the aspirations of ordinary peoples' .

The EFF aptly describes itself as a new generation, "We are not part of the Codesa compromises, which only focused on taking over political power without control of the economy. We are a generation that is fighting for true economic emancipation NOW!", writes Malema in the foreword.

Unlike the ANC, which has been the preferred party to govern the country for a quarter of a century, and the DA which has also enjoyed the privilege of running a province and some
municipalities, the EFF is unencumbered by the baggage of a track record in government.

SA under the leadership of the ANC has gone through numerous and ongoing stop-start cycles of promised transformation in favour of improving the lives of the country's poor and jobless, the majority of who happen to be black. The results have been mixed and many remain excluded from meaningful participation in the economy due to failed policies, corruption and, in many instances, sheer incompetence.

The EFF has arisen and established its popularity on the basis of society-wide disillusionment with the status quo, particularly among the youth, and growing angst toward the country's political and economic elite.

The EFF election manifesto has land and jobs as its central focus, but with the state as the custodian of all land in the country.
News
3 years ago

It would have been bizarre and amiss for the party that has styled itself as the voice of the forgotten and marginalised poor black community not to have produced a manifesto that appeals to the demand for radical change - radical because it does not compromise with the established norm and practice of reconciliation and concept of the rainbow nation.

The EFF promises that under its government all land will be placed under the custodianship of the state, that there will be "massive and protracted sustainable industrial development and diversification to create millions of decent jobs between 2019 and 2024".

The manifesto also contains detailed plans as well as timelines in respect to improvement of the education and health sectors, human settlements, energy, mining, financial sector and social development.

Common to these policies is the overarching - and overbearing - role of the state and expansion of state spending and thus the need for a huge and consistent tax base.

Should the EFF have an opportunity to implement these ambitious plans, it will have to contend with the local and international economic realities that may stunt it before it gets very far.