Manifestos don't win you love of the voters 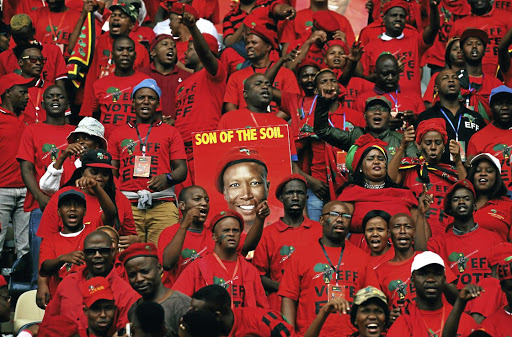 Supporters of the Economic Freedom Fighters (EFF) display a placard bearing the face of party leader Julius Malema during the launch of its election manifesto in Soshanguve, near Pretoria, at the weekend.
Image: REUTERS/Siphiwe Sibeko

Do political parties manifestos really matter when it comes to who you vote for? How many people have actually read the ANC's 66-page and the EFF's 170-page manifestos?

Do voters base their vote on what is contained in a manifesto or rather on how appealing the organisation is?

These are some of the questions Sowetan put to two political analysts as South Africans gear up for elections this year.

Professor Somadoda Fikeni, said most voters did not scrutinise manifestos but are rather interested in the leader, despite his or the party's shortcomings.

The EFF election manifesto has land and jobs as its central focus, but with the state as the custodian of all land in the country.
News
3 years ago

"The leadership that people identify with, trust or excites them, become very important. Some people still want to give the ANC another chance despite the disappointments under the new leadership.

"The new leadership's Thuma Mina and New Dawn mantra does gain traction among those who had almost despaired in face of corruption and the arrogance of the ruling party," said Fikeni.

Mcebisi Ndletyana, said "Manifestos are the least source of information for potential voters and are for a very slim constituency of the electorate.

"They are not meant for popular mobilisation - although politicians will say that they are. Your average voter does not vote based on what the manifesto says," said Ndletyana.

He said the Thuma Mina slogan was to re-activate public activism, as the ANC sough to renew itself post the Jacob Zuma era.

Asked if the ANC could regain a two-thirds majority in the May elections, Ndletyana said chances were slim.

He said, actually, they would be lucky to get 60% because the people were getting the full extent of the rot that has been infesting the ANC over the past decade.

"The ANC would have to answer why we believe they are different now without Zuma when they were there endorsing his decisions and advancing the Zuma infamy ," added Ndletyana.

Corruption must never be allowed to happen again‚ says Ramaphosa

ANC leaders who have been implicated in the various commissions of inquiry currently ongoing in South Africa must come forward to account.
News
3 years ago

Cosatu has called on the ANC to use the party's lekgotla to fulfil the assurances it gave thousands of supporters at its manifesto launch.
News
3 years ago

A commitment in the ANC's manifesto on the Reserve Bank has reignited sharp divisions in the party‚ with supporters of President Cyril Ramaphosa ...
News
3 years ago

Ramaphosa needs to be stringent to get SA's support

You brought hope, which you cannot take for granted.
Opinion
3 years ago
Next Article