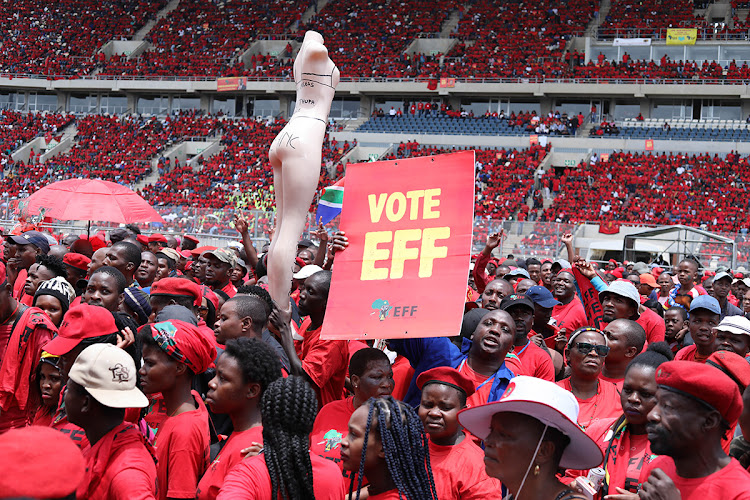 EFF leader Julius Malema on Saturday delivered an ambitious election manifesto for his party with bold promises on the economy and social services.

Addressing a red sea of party faithful that were gathered at the Giant Stadium in Soshanguve north of Pretoria‚ Malema told his supporters that the EFF would go ahead with land expropriation without compensation.

Furthermore‚ summarising from the party's 166-page manifesto document‚ Malema said the EFF would end social ills such as the drug scourge‚ teenage pregnancy and crimes.

Should the EFF win the upcoming elections‚ he said‚ social grants would be doubled‚ education would be free for all while access to primary public healthcare would be expanded on a large scale.

Under an EFF government, 50% of the land would be owned by the youth and women.
News
2 years ago

In a South Africa governed by the EFF‚ Malema said personal income tax and VAT would be reduced while tax for big business would go up.

As for the country's constitution‚ Malema announced that an EFF government would make several changes including allowing 16-year-olds to vote.

"We want the voting age to be reduced to start at 16 years because current laws allow 16-year-olds to give consent for sex and sex is worse than voting‚" said Malema.

"And when 16-year-olds are allowed to vote we know who is going to win because the EFF is the home of young people‚ not some old age home and that is why 16-year-olds must vote."

The EFF launched its election manifesto at Giants stadium in Soshanguve on February 2 2018. This is what EFF leader Julius Malema promised to deliver to South Africans.

Malema said there was a misconception that their promise to double child support grants would encourage uncontrollable reproduction which‚ according to him‚ was already happening before child grants were introduced.

“You must reproduce and be like us the Malemas. We are reproducing at my house and I see the youngest one can already walk. As soon as he starts running‚ I'm adding another one. Don't be scared to reproduce because of poverty. Children will eat what you eat and we must remain the majority ahead of the boers because this is our land‚" said Malema.

Malema also said the current minimum wage of R3‚500 was not enough‚ saying the EFF would raise this to R4‚500 while numerous sectors would have sector-based minimum wages such as R7‚500 for security guards and R12‚500 for mine workers.