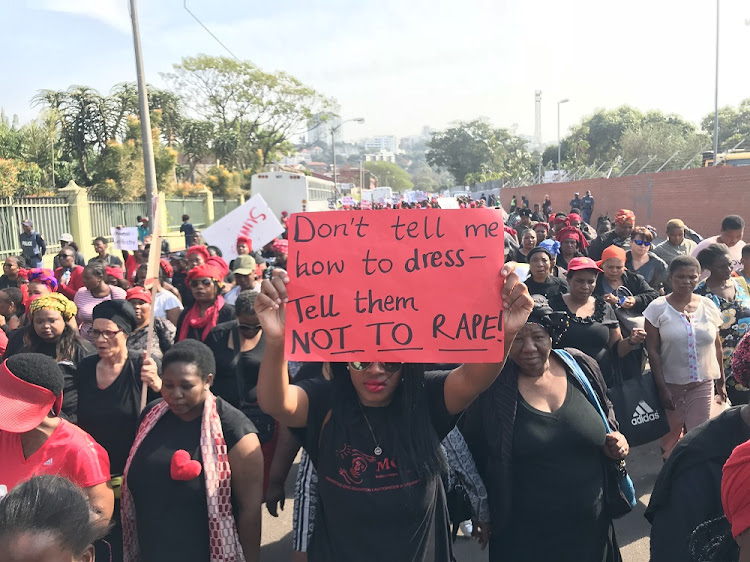 About 800 marchers armed with placards calling for the dismantling of patriarchy and the protection of women make their way through the streets of Durban to the city hall during the #TotalShutdown march.
Image: Thuli Dlamini

Women have always organised against rampant physical and sexual abuse which is common in many cultures across the world.

One of the recent global protests is #MeToo, a movement founded a decade ago by Tarana Burk, a US advocate against sexual violence.

She was moved by an encounter with a girl at a youth camp who reported that her mother's boyfriend was abusing her.

A decade later, reporting of the hidden scourge of sexual violence exploded after Harvey Weinstein was exposed by the New York Times as a subject of multiple accusations of sexual harassment.

One of the actresses, Alyssa Milano, stumbled across #MeToo movement and encouraged women to retweet, achieving more than 500000 retweets in one night.

#MeToo protest is not the first of its kind. Not so long ago, in India in 2012, widespread protests erupted from ordinary women as a reaction to gang rape of a 23-year-old Jyoti Singh who was assaulted so brutally that her internal organs were injured. At the same time in Morocco, a 16-year-old Amina Filali committed suicide after having been forced to marry a man who raped her at gunpoint. A few years later, in 2016, women in Peru took to the streets under the banner of #NiUnaMenos (not one less).

Rape culture and cyber-bullying are dominating the spaces students at higher-education institutions find themselves in.
News
3 years ago

This year, women and gender nonconforming people in SA mobilised under the banner of #TotalShutdown. This culminated in nationwide marches, including the march to the Union Buildings on August 1. The main aim of the campaign was to send a strong message to the presidency about the spiralling prevalence of femicide and rape. Government responded by organising a Gender Summit which President Cyril Ramaphosa attended.

One of the major challenges facing traditional media is the lack of gender sensitive reporting as far as gender-based violence is concerned. Social media campaigns have become very powerful and effective in filling up the gaps left by traditional media.

Many social justice advocacy organisations have spent years advocating against insensitive gender reporting which continue to suppress women's voices. As a way of countering the suppression of women's voices, Soul City Institute created the Not Yet Uhuru (NYU) multimedia content hub.

We simply cannot continue to tolerate living in a society where women and children fear for their safety.
Opinion
3 years ago

Not Yet Uhuru was, of course, originally a quote by the Kenyan freedom fighter, Oginga Odinga. Uhuru is a Swahili word meaning "freedom" and therefore means that Africans - across the mother continent - have not truly been emancipated since independence. This is especially true of women and girls and it is why we have repurposed the expression.

Soul City Institute has embarked on this campaign because we believe that a technological "from the ground up" approach will shift the debate decisively towards women's and girls' rights. The smartphone has become a tool by which women are able to make their voices count. Sub-Saharan Africa currently has 420 million unique mobile subscribers with a 43% penetration rate. By 2020, this number is expected to exceed over half a billion, making Africa the fastest growing mobile market in the world.

As data costs fall, this technological revolution means that even a woman who feels alone in the remotest village can stand up and make her voice heard. Our platform will shine a bright light in a dark place exposing acts of domestic violence and its perpetrators when and where ever they occur. There will be nowhere for abusers to hide.