Our society promotes male superiority at its own peril 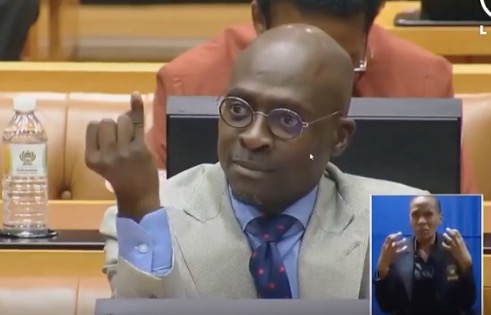 Malusi Gigaba raises his pinky in response to Mbuyiseni Ndlozi during the Ramaphosa Q&A
Image: YouTube/MultimediaLive

In the last few weeks, SA has witnessed hypermasculinity in full display. Most notable of these displays is the one in our parliament, where embattled minister of home affairs Malusi Gigaba waved his pinky, clearly demonstrating the level of machismo in our body politics.

Men can quarrel in the public glare about who has the bigger penis and we are supposed to be amused. Disgusting!

Ever more, we are a society that normalises a repugnant behaviour about the male boasting of whose penis is bigger as if the bigger your penis is, the more rights you are entitled to and, therefore, the more untouchable you can be.

However, as women, we seek a new normal, one in which hypermasculinity is eschewed and those who take the liberty to abuse women are held accountable.

Clearly, as media thought this incident was so amusing, a local broadcasting service, eNCA, saw it fit and suggested that the waving of the "pinkie" by Gigaba was the best way to end its morning news programme on a "lighter note", with much bemusement on the lips of the anchor.

Another one of these incidents was the case involving two women who were arrested following a fire in Alexandra where several children were killed.

The women are accused of culpable homicide due to negligence because they were away at a shebeen when the shack caught fire killing the children.

The magistrate in the case did not allow the women to attend the funeral of their children. This tendency of forcefully applying the "the law" when women are the accused is a further demonstration of abuse of male privilege.

We all know that it takes two, a man and a woman, to have a child. Yet in our country, women are the only ones held accountable in a misfortune that results in the death of a child. Talk about man privilege.

Hypermasculinity connotes the "exaggerated forms of masculinity, virility and physicality". It is represented in three major forms: primarily - that manhood has monopoly on violence; which in many cases is visited against women; women are men's punching bags.

We have heard of numerous cases where political leaders have killed their spouses or partners and we have yet to see their political parties unequivocally condemn such heinous acts, or justice being done.

Hypermasculinity suggests as well, that "danger is exciting and sensational" such that the son of a president can drive his expensive car at high speed, loses control and kill people in a taxi. And several years later, that son of a former president is yet to be held accountable.

The third manifestation is a callous behaviour towards women. This is akin to what we saw in our parliament, when an EFF leader talked about a cellphone without a camera and our distinguished minister Gigiba retorted with the "pinkie".

Would men find it laughable if a woman in parliament suggests that her beau does not give her orgasm?

As a society we cannot play succour to these forms of masculinity and expect that violence against women would end.

This behaviors is unacceptable, if not criminal, and it promotes and perpetuates impunity for those responsible for the scourge of violence against women.

Those who occupy public office must behave in a manner that does not promote hypermasculinity and male privilege.