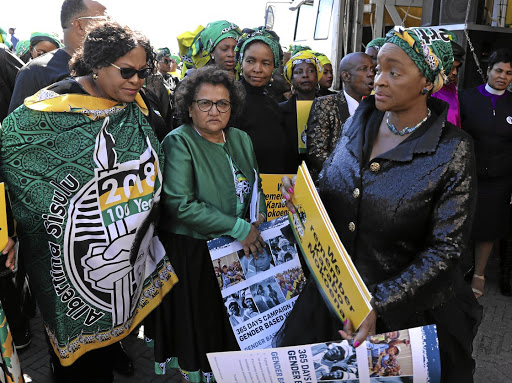 It is disappointing and unacceptable that the ANC Women's League is unable to grasp its leader Bathabile Dlamini's unlawful dealings with Cash Paymaster Services, says the writer.
Image: Simphiwe Nkwali

The ANC Women's League has yet again demonstrated its foolishness.

The organisation finds itself unable, once more, to concern itself with the emancipation of women.

Instead, they have demonstrated their inability to even grasp a simple judgment.

When the Constitutional Court found last week that Bathabile Dlamini did not act in bad faith when seeking an extension of an unlawful contract, the court did not similarly absolve her of wrongdoing in the SA Social Security Agency (Sassa) debacle.

It is therefore disingenuous for the ANCWL to celebrate this as some kind of victory for their leader.

It is, furthermore, concerning that ANCWL secretary-general Meokgo Matuba said that "the ruling has silenced many detractors and hellbent haters of comrade Bathabile, who was found guilty through the court of public opinions despite the fact that during her tenure at social development, beneficiaries received their grants on time".

In the first place, those who criticise leaders are not detractors and certainly not hellbent haters.

As a women's organisation of the ruling party, which claims to advocate the rights of the women and children, efforts by NGOs such as Black Sash and Freedom Under Law should be welcomed, instead of celebrating non-victories of morally bankrupt leaders.

It is, moreover, disappointing that the ANCWL is unable to grasp that its leader's unlawful dealings with Cash Paymaster Services (CPS) is unacceptable, and that the crises currently still faced by Sassa is due to poor leadership by the then minister.

That Dlamini caused a crisis in the country, showed little regard for the poor while in pursuit of an unlawful and invalid contract with CPS, chased professionals out of Sassa and felt no need to account, was not the issue before the court.

The Sassa inquiry is expected to determine the extent of Dlamini's role in the Sassa debacle.

Last week's judgment had to merely determine whether then Sassa CEO Pearl Bhengu and Dlamini had acted in bad faith or were grossly negligent when they approached the Constitutional Court on an urgent basis, seeking an extension of the invalid grant payments contract between Sassa and CPS for a further six months.

Earlier this year, the Constitutional Court was forced to extend the bemoaned contract between Sassa and CPS, even though it had been found by the apex court to be illegal.

The applicants sought an order to find Dlamini liable to pay the costs in her personal capacity.

However, the ConCourt found that though the minister gave an unsatisfactory explanation of why Sassa could not comply with the court order and though her supervisory role was found to be lacking, her actions fell short of gross negligence and she was not found to have acted in bad faith.

Instead, an order was granted against Sassa and Bhengu, in her official capacity, to pay the costs of the application for the extension of the invalid contract.

The ANCWL secretary-general is reported to have said that the "matter is now closed", encouraging Dlamini to "continue with her sterling job of championing the socioeconomic development of women in the country".

It is not true that the matter is now closed.