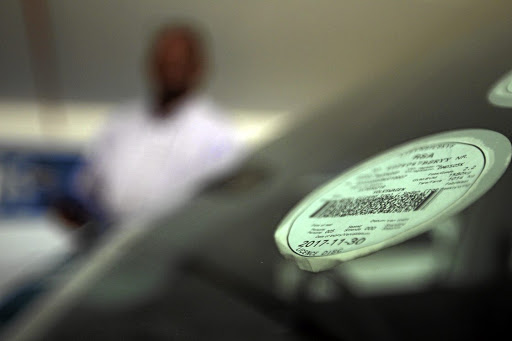 Gauta Lenake bought a car from Leon Auto and later found that it had an outdated car licence disc and alleges that he was misled about the fact. /SANDILE NDLOVU

You have only 21-daysto renew your car's licence disc.

And, if it is not renewed on time, you will pay a fine.

It is unacceptable for a car dealer not to renew the licence of a car that he intends selling as a second-hand vehicle and try to hand over that liability to the buyer without at least giving a discount for it.

Two months ago, Gauta Lenake, 33, of Olifantsfontein, near Midrand, bought a 1996 VW Golf from Leon Auto in Protea Gardens, Soweto, for R19000.

Lenake said the car was not mobile but he saw potential in it as he believed he could repair its electronics and wiring and restore it.

Though the Consumer Protection Act outlaws voetstoets/"as is" agreements, Lenake agreed to buy the car in its deteriorated condition and had it towed to his premises.

Is it a car? Is it a bicycle? These were the questions Mahikeng residents had when they saw Patrick Chweu’s invention.
News
4 years ago

He is in the business of buying, fixing and selling non-runner cars for a profit and was not bothered that the car did not comply with the provisions of the Consumer Protection Act. He believed he could bring it back to life.

His main worry was that the licence disc had not been renewed for four years.

"I have not been able to register the car in my name as that would mean inheriting the debts I know nothing about," he said.

Prior to the purchase, he asked the seller and owner, Jody Reddy, of Leon Auto, if matters around the licence disc were in order and he was told they were.

Lenake said he agreed to buy the car on condition that the licence disc was fully paid.

On the day he collected the car he found that he was lied to and the licence disc had not been renewed, but was given the papers, which is equally important, he said.

Though the seller undertook to pay the outstanding balance this had not been done, Lenake said.

Reddy said Leon Auto sells defective cars and non-runner cars "as is" at a cheaper price as they need to be worked on.

"We sell old cars and some are non-runners," she said.

Reddy apologised for not paying the outstanding balance for the licence disc and promised to have everything resolved by Friday.