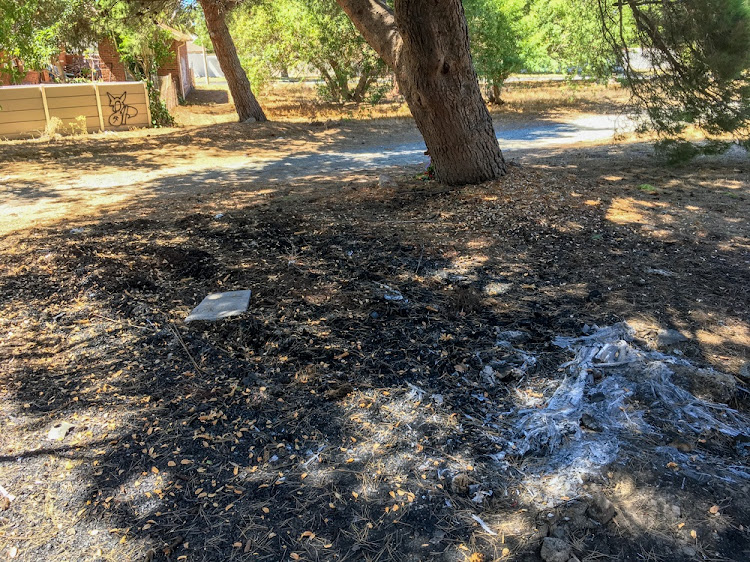 The remains of a burnt-out car are still present behind the Diep River railway station in Cape Town.
Image: Anthony Molyneaux

When a Diep River‚ Cape Town‚ resident saw a green BMW parked in a bushy area near a train station as she left a municipal office on Thursday last week‚ she didn’t pay it much attention.

She had no idea that this vehicle could become key in the investigation into what happened to a missing Cape Town woman.

She said the station is always a hive of activity with commuters catching their trains and security or guards patrolling the platforms. So she found it odd that anyone would park a stolen vehicle there‚ knowing that it may be spotted.

She said she has been living in the area for 22 years and had previously asked local authorities to flatten the area and remove the bushes as it was an area known for muggings.

“The car remained there for the rest of the day. Nobody out of the ordinary was lurking there either. This is a quiet area. The streets are empty during the day because people are at work‚” she said.

The family of a Mitchell’s Plain woman who went missing two years ago will be having a birthday celebration in her name on Wednesday.
News
4 years ago

But later that evening‚ the saga would deepen. The woman was woken up by her daughter‚ who had alerted the fire department of a car burning next to the Diep River railway station. It was the same green BMW.

“The flames were huge and intense. I peered through my window and it was busy with police members and firemen. They worked right through the night‚” the woman said.

On Friday‚ the saga became more gruesome. The charred body of a woman was found in the boot.

Almost immediately‚ rumours swirled that it could be the body of a missing 57-year-old woman from Constantia whom family‚ friends and authorities had been searching for on Thursday. Gill Packham‚ a teacher at Springfield Convent in Wynberg‚ was reported missing.

A burnt patch of grass and a scorched tree are all remains from the burning vehicle.

Police are still playing their cards close to their chests.

“Kindly be advised that this office cannot confirm yet the identity of the body. We are awaiting feedback from forensics in terms of the post mortem reports. Detectives are also currently reviewing video footage and other possible evidence. No arrests have been made as of yet‚” said SAPS spokesperson Captain FC Van Wyk.