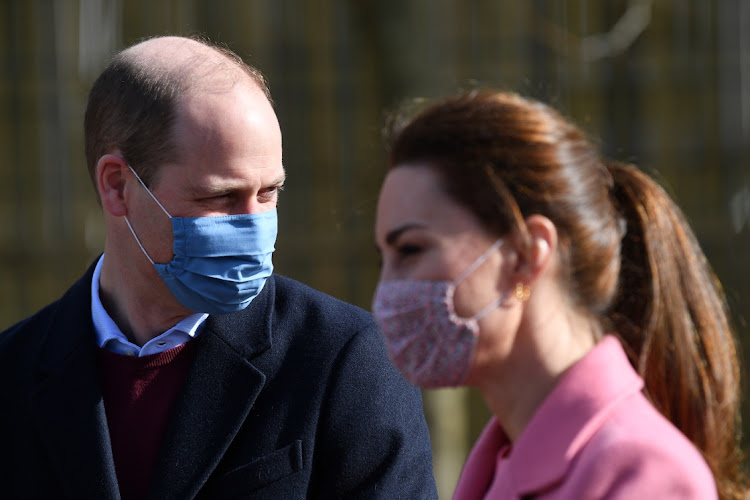 Prince William said on Thursday that Britain's royals were not racist after Meghan, wife of his younger brother Harry, said one unnamed member of the family had asked how dark their son Archie's skin might be.

Meghan, 39, made the allegation during an explosive tell-all interview that she and Harry, 36, gave to Oprah Winfrey and which was aired on Sunday, plunging the British monarchy into its biggest crisis since the 1997 death of Princess Diana, William and Harry's mother.

On a visit to a school in east London, William said he had not talked to Harry since the interview was broadcast just over three days ago.

NEW (SOUND ON): The Duke of Cambridge says he has not yet spoken to his brother and that “we are very much not a racist family” as he and the Duchess leave an East London school this morning: pic.twitter.com/gTGmUBH1Kg

Asked by a reporter if the royal family was racist, William said: "We're very much not a racist family."

In the two-hour show, nearly three years after their star-studded wedding in Windsor Castle, Meghan said the royals had ignored her pleas for help while she felt suicidal, while Harry said his father, heir-to-the-throne Prince Charles, had let him down and that he had felt trapped.

On Tuesday, Buckingham Palace issued a statement on behalf of 94-year-old Queen Elizabeth, the princes' grandmother, in which she said the family were saddened by how challenging the couple had found the last few years.

But it was the couple's accusation that one of the royals had made a racist comment which has dominated coverage and has the potential to cause lasting damage to the 1,000-year-old monarchy.

Serena Williams has written a note that has been widely shared on social media defending her friend Meghan Markle.
S Mag
8 months ago

Meghan Markle says some of the concerns and conversations from the royal house was about how "dark” her son Archie's skin might be.
S Mag
8 months ago

Meghan, whose mother is Black and father is white, said while she was pregnant with Archie there were "concerns and conversations about how dark his skin might be when he's born."

Neither she nor Harry said who had made the remark, although Winfrey later clarified that Harry had said it was not the queen or her 99-year-old husband Philip, who has been in hospital for three weeks while the crisis unfolds.

"That conversation, I'm never going to share," Harry said during the interview. "But at the time, it was awkward. I was a bit shocked."

In the statement from the queen, the palace said issues of race were concerning and would be treated very seriously, but pointedly stated "some recollections may vary".

The Palace has said that it was a family matter that should be dealt with privately.

During the interview, Harry also laid bare how distant he had become from the other members of his family, saying his father had stopped taking his calls at one point, and that there was "space" in his relationship with William.

"Much will continue to be said about that ... as I said before, you know, I love William to bits, he's my brother, we've been through hell together and we have a shared experience," he said. "But we're on different paths."

The interview, watched by 12.4 million viewers in Britain and 17.1 million in the United States, has proved divisive among the British public.

Some believe it showed how outdated and intolerant the institution was, while others decried it as a self-serving assault that neither Elizabeth nor her family deserved.