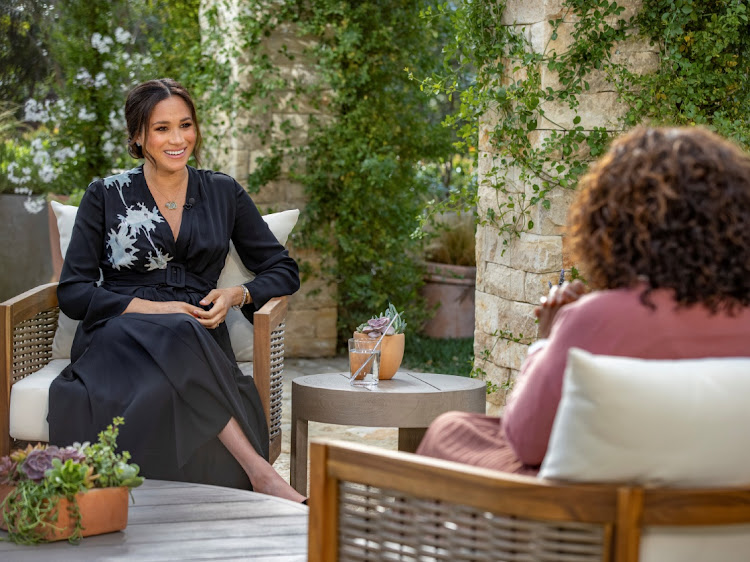 Meghan, The Duchess of Sussex during her and Harry's interview with Oprah Winfrey.
Image: HARPO PRODUCTIONS

A senior executive at British broadcaster ITV has spoken to presenter Piers Morgan about his criticism of Meghan, the wife of Prince Harry, the chief executive of the company said on Tuesday.

Morgan, a former CNN presenter, has long criticised the couple, saying they have damaged the royal family and sought publicity on their own terms, without the scrutiny that comes with the job.

ITV Chief Executive Carolyn McCall told reporters that she had not spoken to Morgan herself, but Kevin Lygo, managing director media and entertainment, had.

"I know Kevin Lygo is speaking to him on a regular basis and has done so in the last couple of days," she said.

Morgan has cast doubt on Meghan's comments in the interview.

However, when his co-presenter noted that Meghan had said she'd been driven to the verge of taking her own life, Morgan replied: "She says that, yes."

McCall, who was presenting ITV's full-year results, said Morgan had "qualified" his earlier comments on not believing Meghan on the Good Morning Britain breakfast show he presents on Tuesday.

She also said Morgan was a freelance presenter and ITV had no control over his Twitter account.

"He's got personal profile on Twitter, it's his personal account," she said. "If it was about our shows, that would be different."

She said she personally believed Meghan, and ITV was committed to supporting mental health .

"ITV has many voices and we try and represent many voices on ITV every day," she said. "It's not about one opinion."

Serena Williams has written a note that has been widely shared on social media defending her friend Meghan Markle.
S Mag
10 months ago

Meghan Markle says some of the concerns and conversations from the royal house was about how "dark” her son Archie's skin might be.
S Mag
10 months ago

Josh Pieters and Archie Manners tricked the "experts" into believing that their views would be shown immediately after the interview was broadcast.
Entertainment
10 months ago
Next Article